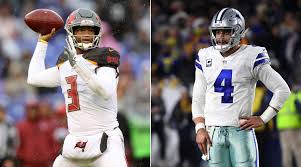 It can’t be a surprise that I’ll confess to loving top-end QBs. I am always willing to spend big bucks in an auction to obtain and elite quarterback, and I’m willing to draft the studs a round earlier than they should go. In 2QB and Superflex leagues, that’s even more the case: I don’t just want one difference-maker at quarterback; I want two. I’m all about the QB studs.
For 2019, however, I’m going against that typical strategy. This is the definitive year to be seeking value at QB. (Update: for a list of specific quarterbacks to target, draft these four and be set for the season!)
Last summer, I wrote a six-part series outlining various approaches to roster construction at the quarterback position:
1) It’s All About the QBs
2) The Multiple Stud QBs Approach
3) The QB Value Approach
4) The Scrubs Approach
5) The Balanced Approach
6) The Hoarding Approach
Each approach has its merit, and each is defensible in just about every year. Just about. 2019, however, will play out far differently: chase the value.
Don’t get me wrong: Patrick Mahomes will be a beast, and I’d love to have him on my team. If I break the bank for any QB, then it will be him. After that, however, the short list of quarterbacks in the next tier — which only goes a handful of QBs deep at most — doesn’t distance itself that much from the next dozen quarterbacks. Are you sure that your number three-ranked QB (likely Watson or Ryan) is worth twice as much draft value as your number thirteen-ranked QB? And would you be astounded if half a dozen quarterbacks ranked in the teens ended up as top-10 QBs in 2019?
The ceiling of at least 20 (!) quarterbacks this year is top-10. Easily. Granted, some of them have lower floors than others. But, you could realistically find three of those top-20 QBs for the cost of Mahomes alone. I would much rather pair up a trio of high-ceiling quarterbacks in 2019 with a stud at another position than go all-in on a top QB or two and be left with flyers at running back or wide receiver.
We all have our own tiers and our own lists, of course. But know that you’ll have no problem using three mid-round picks or the same money that you’d allocate toward Mahomes to get three quarterbacks, each of whom could post stats in the top-10. That trio combined with an elite player that you draft in the first round or that you spend your big bucks on will be a nearly unbeatable start to your team.
Mock it through a few times. You’ll love the roster that you build that way!
Have you tried this strategy yet? How did your team end up?