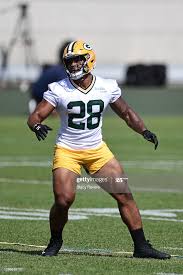 I’m an avowed AJ Dillon fan, both in real and fantasy football. Before the second round of the NFL draft began, I was talking with my cousin and long-time fantasy football adversary and called it by name that the Packers would make Dillon their 2nd-round pick.

In the off-season, I invested heavily in Dillon in all my dynasty leagues. So call me a believer or call me biased. I still like the pick.

We know why the Packers selected him: In 2019, Aaron Rodgers’ QB rating was elite with Aaron Jones on the field and bottom-tier with him off the field. By drafting Dillon, the Packers were hoping to help Rodgers far more than a rookie wide receiver would have done. An improved second running back would keep Rodgers’ play top-end even when Jones would be off the field. And we also know that the Packers want to incorporate multiple running backs in their game plan. From an offensive system standpoint, the pick fit their scheme and plan beautifully.

So why isn’t Dillon playing more? Isn’t it a waste of a second-round pick just to have a guy on the bench? Not in this case, and that’s because of Jamaal Williams.

Running, catching, and pass-blocking are critical in Matt LaFleur’s offense, one built on flexibility and misdirection. And LaFleur’s system is complicated. Jones and Williams have the advantage of being in that system for a second year, whereas Dillon had to learn it without benefit of a full off-season. But the most important factor is that Williams, arguably the most improved player in the Packers camp this off-season, has proven that he can be productive in all three phases of the game.

Jones’ continued elite play and Williams’ remarkable off-season improvement have relegated Dillon to a bystander so far in 2020. He’ll get touches over the course of the year (injuries are part of the RB narrative), but he might not have the typical role that one would expect from a second-round draft pick.

I still see Dillon as a natural fit in their scheme. He’s a powerful runner and strong pass-blocker. Though he wasn’t asked to catch much in college, his hands should be good enough for LaFleur’s offense to function. And the Packers must feel that way, too, or they wouldn’t have drafted him.

IMO, Dillon remains a rare talent. That’s the reason the Packers — and I — bought into him. We might just have to wait until 2021 to find out if we’re right.