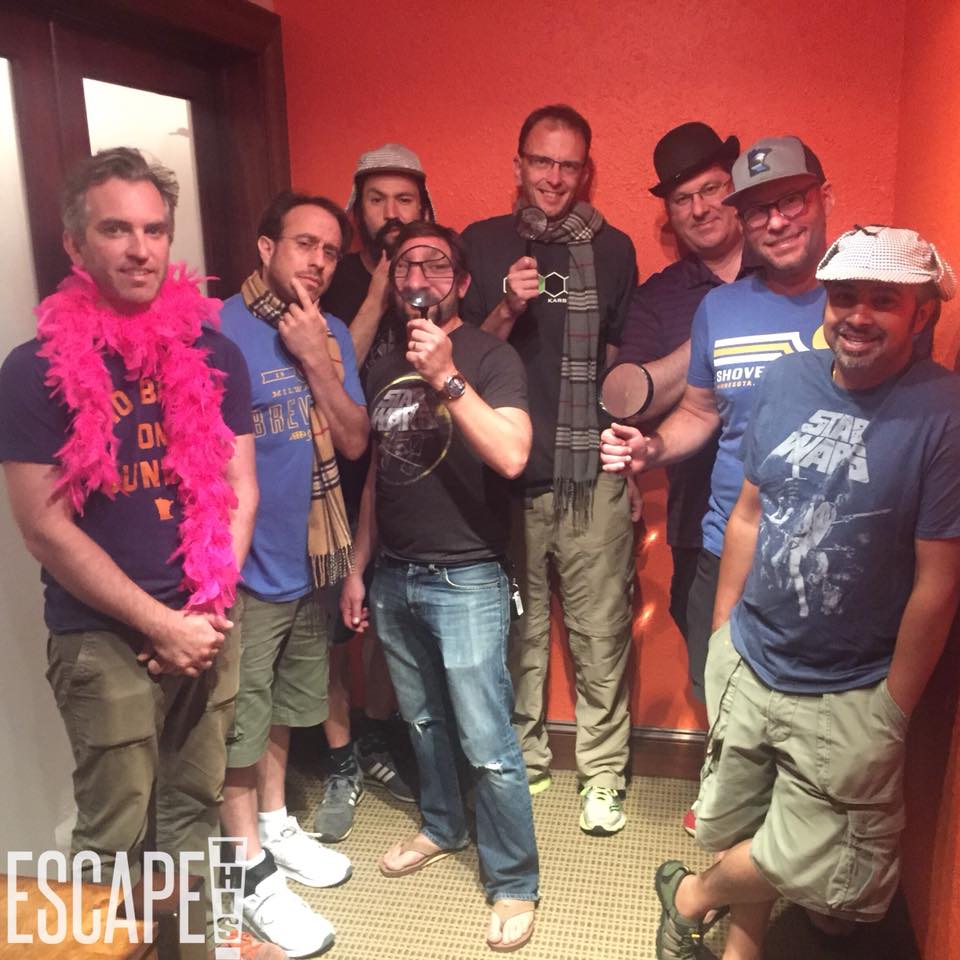 The second fantasy football league that I ever played in started my sophomore year of college with five other new but soon-to-be lifelong friends. Now called The House League, our ten-team league is entering its twenty-fourth season! I just returned today from our annual draft weekend and get-together. As always, the weekend is a highlight of my year — not just for the fantasy football or for our newfound enthusiasm for Escape Rooms (this is us pictured after one successful escape; I’m second from the left) but in particular for the continued celebration of our lifelong friendships.

Like all friendships do, our league has morphed a few times over the years. This year, we introduced a Superflex position. I’ll post my team below, and I’ll share my strategy and thoughts about the quarterback position in the auction in detail. As always, I invite any comments and questions (especially from members of the House League who want to share their strategy and insights!).

*Note: Essentially a redraft league, The House League has some innovative salary cap rules and also gives value to money left over from the auction. Rather than explain them all here, let’s consider the effective starting auction budget to be $216.

Being the first year that our league transitioned to a Superflex league, I anticipated being able to secure values at this position and determined that adopting The QB Value Approach would be best. As it were, five quarterbacks went for more than Wilson’s $30; honestly, I considered almost each of them values. Given that I have Wilson as my second-ranked quarterback for 2018, though, I was thrilled to land him at a relative bargain.

Despite the bargains at the top-end level of QBs, I felt confident that I could nab two quarterbacks on whom I was high for far less later on. That proved prescient, as I continued to pass on numerous quarterbacks who went in the teens in dollars: Garoppolo ($19), Mahomes ($17), Ryan ($17), Prescott ($16), Rivers ($16), Roethlisberger ($16), Smith ($15), Mariota ($15), and Carr ($12). Admittedly, I was in on the bidding on all of them, and it pained me to see of my favorite QBs for 2018 go off for board for what I considered to be incredible value. In addition, as the auction continued, I feared that having just one QB after all the aforementioned quarterbacks were off the board would cause a value spike for the remaining good ones, thus sabotaging my strategy.

I continued to gamble, though, and felt more relief than vindication when I landed two quarterbacks on whom I am far higher than most for only $10 each: Jameis Winston (whom I name as a potential stud quarterback at the end of this post) and Blake Bortles (whom I discuss here).

Truthfully, it was risky. Had a bidding war ensued on either, then I would have been forced to overpay for one of these quarterbacks, especially compared to the value that I passed on earlier, or I would have had to settle for lesser QB prospects (e.g., Trubisky, $5; Flacco, $3; or a rookie quarterback at $1) in whom I had no real interest.

I admit that I likely should have acquired a fourth quarterback given the depressed prices. If/when an opportunity to trade a quarterback emerges, then having that fourth starting QB would be critical. But, as you’ll see from the rest of my team below, I spent big at other positions, particularly wide receiver, leaving me short on money to deepen my QB stable.

Ultimately, my value approach at QB netted me an elite quarterback who went for less than I believe that he should have (Wilson), an unappreciated QB who should finish with QB2 numbers at QB3 prices (Bortles), and a potential stud QB — when he returns from his suspension, of course — for bargain value (Winston). And, it allowed me to fill out my team with other quality players and studs. This auction serves as a great example of The Value Approach to QBs.

This is the weakest part of my team, especially with Ingram suspended for the first four games. But, I think that I have enough quality here not to sink my season with some possibility to extract RB2 upside from some undervalued players.

The benefit of my quarterback strategy was the ability to construct a deep and elite stable of WRs. Despite his pre-season injury, Baldwin jumps out to me as incredible value. Given that I can start up to four WRs in addition to a Superflex player, this group should carry my team most of the season. There is upside on my bench despite uncertainty about their roles and production.

Like with Winston, Ingram, and Baldwin, I didn’t allow the prospect of missed time due to suspension or injury deter me from taking a significant player at a discount. Obviously, if Walker is not ready for Week 1, then I’ll need to use the roster spot than I gain from moving Guice to IR to pick up a player here.

If any of my top players get injured or are struggling early on, then that could sink my season. With so many of my players suspended or injured already, I don’t have much room for missed games or under-production from my otherwise healthy and available players. If I can make it through the first four weeks, however, then I believe that I have a highly competitive team. My quarterbacks are strong enough to compete with almost anyone else’s. The money that I saved at that position allowed me to create a deep and strong stable of WRs, complemented by a reliable TE and a RB group that should pull its weight. If all those come together, then I think that my prospects in 2018 are strong.

What are your thoughts about my QB approach or my team’s prospects overall? Is there an angle that I overlooked or missed?