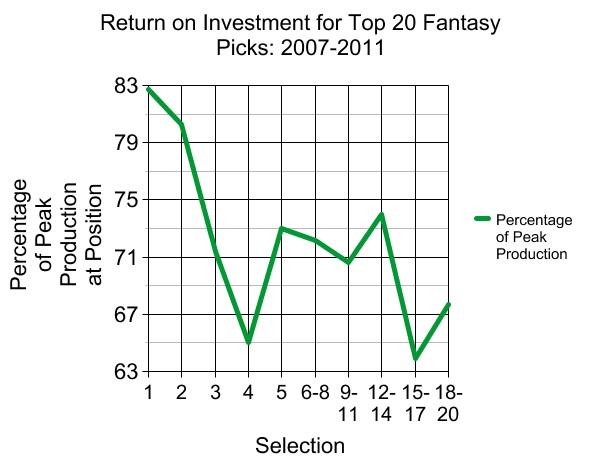 I remember the classic riddle: Why are 2018 quarters worth more than 2017 quarters? (Go ahead: think for a few moments.)

As new leagues are starting and forming and as old leagues are determining draft position, the ubiquitous conversation of preferred draft spot returns. Whenever I get asked about which draft position is best to take (note: presuming a league where you can trade draft picks), either in a redraft league or in a dynasty startup, I always recall the aforementioned puzzle. What puzzles ME most, however, are the responses that I often hear.

All of these rationales are fallacious.

Picking last is never preferred. Pick earlier, have some courage, and take the player that you want. Picking in the middle can avoid runs, but picking at either turn can create them. And picking based on your tier of top players to get a better 2nd-round pick ignores the fact that there might be dozens of draft rounds to follow!

To me, the answer is simple: Pick first. Always. And, to me, the logic is simple, too:

Round 1 is more valuable than Round 2.

Round 3 is more valuable than Round 4.

Round 5 is more valuable…

Clearly, it stands to reason that the best spot to be in is at the beginning of every odd-numbered round. Those picks carry — by far!! — more value than the other picks.

Put that together, and, by value, it is ALWAYS best to take the first pick. You have the top choice of players in the more important rounds AND you have the most trade value if you decide to trade it away. I would much rather be picking 1.01 than 1.02 or 1.08 if I want a player, and I would much rather be trading down from 1.01 than from 1.04 or 1.11 if I want to make a move.

Don’t take a lesser pick because you’re scared about having to pick which player you prefer out of three. Don’t try to manipulate the entire draft based on getting a better second-round choice. Take the most valuable pick in the most valuable round — and in every subsequent pair of rounds, too!! — and get the best players or the best return in a trade.

Trust me: You’ll come out waaaay ahead. Otherwise, I’ll happily trade you my 2017 quarters for your 2018 ones.