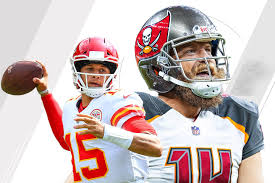 We all got it wrong. The accepted mantra in the 2018 pre-season was to wait on quarterbacks this year. The talent and production would be deep in all tiers. While the elite might be few, they wouldn’t be that much better than the large group of second-tier QBs, a grouping that in some rankings went 12-14 deep. Rather than spending big on an elite QB or two, just get whatever two are left from that second tier: they’ll be almost as good and far cheaper.

So went the thinking, but we all got it wrong.

A typical scoring system for quarterbacks in a 2QB or Superflex league is 4 points per passing touchdown and 1 point for every 25 yards passing, with rushing production being the standard 6 points for a TD and 1 point for every 10 yards rushing. A league with that scoring system debunks the pre-season thinking. The real mantra should have been, “2018: The Year of the Stud QB”.

On a per-game basis, Cam Newton is the number four-scoring QB in the system above, nearly four (!) points behind leader Patrick Mahomes. Still, that’s not the most telling discrepancy. Every year, one — in this case, two, along with Ryan Fitzpatrick — quarterback always seems to have a breakthrough season. What is most telling, though, is that the gap between Newton at four and Mitchell Trubisky at seven is larger than the gap between Trubisky and Kirk Cousins at fifteen.

So, what does this all mean? Without an elite quarterback, your two second-tier quarterbacks cannot match the production of any team with an elite QB and even the lowest-ranked starter. You’re simply too far behind in production. Unless a team is dominant elsewhere, I am willing to bet that every championship roster in a 2QB or Superflex league will have at least one elite quarterback.

The solution is clear: If you don’t have one elite quarterback for the second half of 2018 (note: I would put the Fitzpatrick/Winston combo as a top-5 one the rest of the way), then get one. And if you have one, then try to get a second.

Indeed, in one league (the only one in which I co-own the team), my co-owner and I considered ourselves quite clever during the draft. Ben Roethlisberger and Philip Rivers both dropped, so we scooped them up in back-to-back picks. Later, we added the then-suspended Jameis Winston.

Initial returns suggested that our strategy was prescient. Both Roethlisberger and Rivers were top-ten quarterbacks, and Winston was soon to shepherd the most quarterback-friendly offense in the NFL (yes, more than Kansas City’s). Indeed, after Winston’s first games back, all looked good.

Nonetheless, we made two improbable moves. Instead of using our team’s depth to trade for a running back at the deadline, we used it all to acquire Cam Newton, leaving us with four (!) top-end QBs. Why? Because we recognized what the quarterback mantra of 2018 should have been — the Year of the Stud QB. (And, yes, Cam Newton will be one in the second half of the season.)

Fantasy football is as much about identifying trends as anything else. We were all wrong about quarterbacks entering 2018; it’s not too late to fix that.