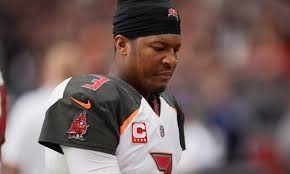 When our convictions are challenged, many of us entrench ourselves, shouting even louder despite all the contradictory evidence. Others would suggest that we are not just stubborn: we’re egotistical, and we hate to be wrong. But, we would argue that we have confidence in our well-formulated convictions.

On the other hand, many of us willingly change our position when a compelling contrary reason presents itself. Others would suggest that we are wishy-washy, always susceptible to recency bias. But, we would argue that we are willing to embrace a new belief unhindered by the fear of judgmentalism.

The litmus test is here, and it’s called Jameis Winston. All off-season and repeatedly on this website, I have been championing Winston as a top-5 quarterback and as the best “buy” in fantasy football.

Having been benched for Ryan Fitzpatrick for Week 9 of the NFL season, it is unclear when or if he will get his job back. So, it’s time: Should I be sanguine and double down on him or be amenable and admit error on my part?

If you were lamenting that you had missed the “buy” window for Winston just a couple of weeks ago, then I have great news for you: that window has become a wrecking-ball-sized hole in the wall. Owners are willing to jump ship now and potentially drop him outright.

Winston’s numbers don’t lie: From a fantasy football perspective, he has been the best quarterback (up until Sunday) since the end of last season on a per-game basis — despite the interceptions. When he plays, he is an absolute monster.

Admittedly, Ryan Fitzpatrick put up impressive numbers earlier this year filling in for Winston. But, let’s remember than Fitzpatrick himself was benched for Winston a few weeks ago due to his penchant for turnovers Moreover, while Fitzpatrick has had periods of production, he has never had sustained success. Finally, he does tend to miss games with injury, as well.

The odds of Fitzpatrick playing the rest of the season are slim; this could even be just a one-week benching to help Winston make adjustments. And Winston’s numbers would remain elite when he returns to the line-up, especially since he might be interviewing for a job for next year if the Buccaneers release him after this season. Yes, Winston’s contract is guaranteed for injury next season (perhaps making Tampa Bay fearful of playing him), but that’s a secondary consideration when a franchise is evaluating its potential quarterback for the future. Remember, he is only 24 years-old and still growing at the position!

Think of buying Winston like making an offer for an elite player who has a ligament injury in his knee or like holding Le’Veon Bell all season: you’re not entirely sure when he will return (or if he will be held out for the season), but you want him on your bench if and when he does.

You might be able to get Winston for next to nothing right now (or even off the waiver wire soon). If he was a steal before, then he’s historically cheap now. Since the acquisition cost would be minimal, you could even cut bait at any time if need be without remorse.

Of course, since we’re doubling down, we know that won’t be necessary!

Of course, it’s also possible that I was just wrong about Winston. 🙂