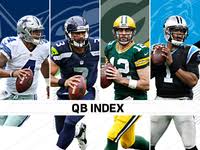 The trade deadline in many leagues is this week or in the next couple of weeks. Here are some key buy and sell targets, separated by what assets you are willing to trade away.

For teams willing to pay the price for a premium player, you’ll be targeting Cam Newton or Russell Wilson.

Cam Newton is celebrating a throwback MVP-type season, and his remaining schedule suggests that he is line to be the second-best quarterback the rest of the way (with the well-earned nod to Patrick Mahomes). Amazingly, he is still not considered in the QB elite. Perhaps it’s because he does not boast the year-to-year consistency of other players, or perhaps because he does not put up the ostentatious passing numbers that some of his peers do. Regardless of the reason, he is an elite QB whom you could potentially get at back-end QB1 prices.

Russell Wilson is historically a second-half quarterback, and his 92 rushing yards last week despite the presence of a good ground game bode well for a return to fantasy prominence. Ironically, Wilson tends to have better overall numbers when his pass attempts are limited: having the support of a run game, while limiting his volume, increases his efficiency and, more importantly, his productivity dramatically. While he is unlikely to replicate his top-3 overall QB performances of past seasons, he is a shoo-in for QB1 production with a sold opportunity to finish in the top-5. Given his slow first half, he might only cost QB2 prices.

For teams hoping to fill in a quarterback hole on the cheap, you’ll target Dak Prescott or Blake Bortles.

Both Dak Prescott and Blake Bortles have had periods or seasons of elite productivity, and both have had moments where you wondered if they’d be benched. The past few games have shown that Prescott is returning to QB2 levels, and Bortles has had a few QB1 games this season already. In addition, each of them has had a recent major addition to his team: the acquisition of Amari Cooper for Prescott and the return of Leonard Fournette for Bortles.

Both should be QB2s the rest of the way with QB1 games sprinkled in — I have Prescott ranked higher than Bortles — but each might only have an acquisition cost of a QB3.

Your quarterbacks to sell are those whose name value carries more weight than their expected production. Tom Brady and Matthew Stafford are atop that list. Both have struggled this year, falling well short of pre-season expectations. In addition, Brady carries with him the pattern of poor end-of-season performances, and Stafford had a key target in Golden Tate traded away. You could still find someone who values them at low-end QB1 or top-end QB2 prices; neither will be that productive the rest of the way. This is your time to cash out.

Good luck to everyone in your deadline deals!