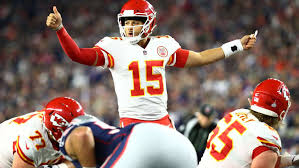 It’s not you, Pat. It’s me. You’ve been so good to me all these weeks, and I just know that it could never get any better. Let me remember you — us — for the memories that we have made. Good bye, Pat. I’ll miss you less than you think…

Somehow, I doubt that my “Dear Pat” letter will never reach Patrick Mahomes. So be it. As hard as it is to lose a first love — and, let’s be honest, you drafted or traded for Mahomes believing in his upside — there are times to let go. And now is that time for Mahomes.

In the 2016 and 2017 seasons, only Deshaun Watson in his limited games last year (a level of production that he has not been close to matching in 2018 despite his terrific start to the year) outscored Patrick Mahomes’s 2018 per-game numbers to-date. Yes, Mahomes is scoring more points per game than any other quarterback has over the past two-and-a-third seasons. And, yes, would be hard-pressed to rank any QB above him for the rest of the 2018 season. So, why would I endorse selling him at this point? Don’t we look for difference-makers in fantasy football?

The regression argument is specious and lazy. Predicting that Mahomes will be the greatest statistical quarterback in NFL history by the end of his career would be irresponsible, but six games is enough to show that Mahomes’s production is not a fluke. Matching his outlandish totals might be impossible, but simply to aver that he must necessarily crash because of his extraordinary performance to date ignores his talent, the talent of the pass catchers on Kansas City, the coaching staff, and the scheme.

No crash is coming.

What is noteworthy, however, is that, through six games in 2018, six (!!) other quarterbacks are doing what Mahomes is doing: out-scoring every QB except for Watson in 2017 on a per-game basis! (To be fair, two of them play for the same team: Tampa Bay.) Passing is up in the NFL. Scoring is up in the NFL. While Mahomes is leading the way, he is not the only quarterback to be putting up extraordinary numbers.

Still, the evolving mythical narrative around Mahomes, much like that of Wentz last year before his injury, sees him as immeasurably more valuable than any other quarterback. But, is that really the case? Can you say with certainty that he is head-and-shoulders above the other elite-level quarterbacks? And note that Aaron Rodgers and a resurgent Andrew Luck are not even on that list of six!

If you sell Mahomes, then you can likely find another quarterback whose numbers in weeks 7-13 (or, if things go as planned, through week 16!) won’t be far off from his. Pick your favorite from among Rodgers, Brees, Ryan, Goff, Cousins, Watson, Luck, Roethlisberger, and, of course, Jameis Winston. You might even find an aggressive owner with quarterback depth to trade two of the aforementioned quarterbacks or one of them and, say, Cam Newton for Mahomes alone. Or you could pick up a valuable starting player or two at other positions with a minimal downgrade at QB.

Don’t get me wrong: If you have a stacked team, then please keep Patrick Mahomes. If we were re-drafting now, he would be my number one QB off the board. But, while others are focused on his other-worldly numbers from the from the first six weeks, you can capitalize on that fever by acquiring a replacement quarterback with likely similar production the rest of the year and another valuable piece or two. This is the time to sell in a redraft league.

If you are in a dynasty league, however, that changes the equation since he is far likelier to be an elite fantasy quarterback for the long-term than many of the similarly-valued and older QBs in 2018. But, don’t be shy to explore the trade options — remember that, at this time last year, everyone was tabbing Carson Wentz as the number one QB in fantasy football…