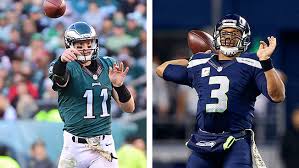 “You are what your record says you are.”

We can all pat ourselves on our backs for our hot starts in some leagues, make excuses for our winless teams in others, or dream about paths to glory for our mediocre teams.

But, the bottom line is that your record is locked in after five games. Maybe your team over- or underachieved, or you maybe you have reinforcements coming off the bench. In all cases, we need to examine what quarterback moves we need to make to set ourselves up for as much success as possible in the short-term and with an eye toward the playoffs.

Congrats on your hot start!! Without ignoring that you still need to win games in the regular season, you can begin to look ahead to the playoffs, identifying QBs with high trade value whose end-of-the-year stats might not live up to their name recognition value. Similarly, you can pounce on those quarterbacks whose production might be underwhelming to this point but could be difference-makers in weeks 14-16

Both of them should net you something meaningful in return. They have proven track records (the former more than the latter) and talented teams around them. Brady, though, has historically struggled toward the end of the regular season, and Wentz has some upper-level pass defenses on his fantasy football playoff schedule.

The opposite of Brady, Wilson tends to put up his best numbers (and usually elite numbers) in the second half of the season. Frustrated owners or owners with losing records might feel impatient waiting for his anticipated production. Newton has been producing, so he’ll come at a high cost. But, his final few weeks pit him against some of the weakest pass defenses in the league.

Your current roster might score the most points as-is in Week 16, but that’s irrelevant if you miss the playoffs. You’re now in win-now mode each week, and you need to acquire QBs that will get those those wins ASAP even if it means weakening your odds to win in the playoffs.

He’s not elite, but he can have monster games. And his upcoming schedule gives you multiple weeks of likely top-10 production. Admittedly, there are not a lot of undervalued quarterbacks who come cheaply now, so you might need to resort to someone like CJ Beathard. You can trade away a more valuable QB for Beathard and another essential position player and hope that Beathard continues to put up fantasy-friendly numbers. You can also apply this logic to any of the lesser-producing QBs whom you think can give you top-15 or even top-20 numbers.

You know it, and I know it: Mahomes, Goff, Rodgers, etc. — they are irreplaceable. If you can get the haul that they’re worth in return, shoring up potentially three line-up spots for one of them, then you need to make the move. Their points are wasted on your bench if you miss the playoffs.

This is honest assessment time: Are you a good 3-2 or 2-3 team or a bad one? Have you overachieved or simply run into the weekly top points-scorer in each of your losses? If you’re a team on the upswing, then you’ll can stay the course or, if you’re bold, act like a “Loving life” team. If you’re a team that has backed into ugly wins, then you’ll need to act like a “Hating life” team. Simply standing pat and hoping that all works out is almost always the best path to a middle-of-the-pack season.

Good luck adapting your roster so that you can make it to the playoffs — and hopefully to the championship game!