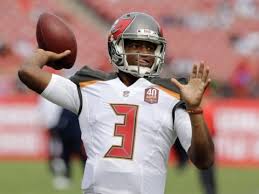 I can’t understand it. In redraft leagues, Jameis Winston rarely cracks the top 20 quarterbacks drafted. In dynasty leagues, I don’t see him anywhere in the top 10. That makes him my top buy-now quarterback in all of fantasy football.

Let’s get it out there: Winston, as we all know, will miss the first three games of the 2018 season with a suspension. Indeed, the Buccaneers brass has even declared that he might not start immediately upon his return. Certainly, Winston’s stock should drop with the looming suspension, but it’s the shocking plummet of his value that makes this the prime opportunity to buy him. Indeed, news from Tampa Bay of Winston not inheriting his starting job upon return might afford you the final opportunity to buy him from a panicking owner. (This is particularly apt in a dynasty league, where missing three games in 2018 is negligible compared to his career value!)

Let’s also get this out of the way: In all leagues — redraft and dynasty — Ryan Fitzpatrick should be either available or cheap enough to acquire to fill in for Winston as your QB2 if you don’t have a better option already. Consider that acquisition cost part of the “buy” price for Winston.

Here’s what I do know:

-Last season, Winston started and finished eleven games. Project those totals over a full season, and he would have led the league in passing with just short of 5,000 yards.

-Last season, after returning to the lineup from a shoulder injury for the final five games of the season, he was the second-highest scoring QB in fantasy football.

-While being decried as having not improved as a quarterback, all his major metrics — passer rating, completion percentage, yards-per-attempt, interception percentage, and more — improved, in some cases dramatically.

At just twenty-four years old, the accumulated stats that Jameis Winston has at this point in his career are rare. You don’t see young QBs putting up the numbers that he has. And, while off-the-field concerns exist, there aren’t public reports of clubhouse issues. This is a young NFL player, historically good and improving rapidly. He is also surrounded with an established and ascending collection of pass-catchers.

I consider him a lock to be a top-10 quarterback the rest of the season when he returns to the starting line-up; you can buy him in the 20s in a redraft league. In a dynasty league, he’s squarely in the second-tier of quarterbacks behind Rodgers, Wilson, and Wentz — anywhere from fourth to eighth. His startup ADP is in the teens.

Put it most succinctly: The cost to buy him now is his floor. He is the absolute best buy in all of fantasy football leagues. Astute owners will capitalize now.