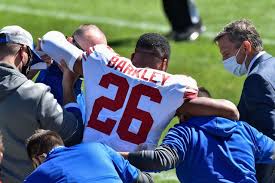 Yes, you are cursed.

I wanted to be snarky. Yes, you are cursed! Because the truth is that we all know that there are MANY people that are having FAR worse injury luck than he is. How about the injured players? How about their teammates? How about the managers and owners of the team? How about 49ers fans, whose starting quarterback, top two runnings backs, starting defensive end, and backup defensive end all got injured in the same game, joining the already-injured Dee Ford, George Kittle, and Richard Sherman on the sidelines?

Yes, they are ALL having far worse injury luck than you.

Or how about Lisa White, mother of James White and now widower of who is still in critical condition? Yeah, I don’t think that your injury luck compares.

I get that the original post was one of venting. I get it. And I have no problem with venting on a forum message board. But this particular question triggered an emotional response in me. We as fantasy football players all too often forget that NFL players are human beings. Entertainers, yes. Elite athletes, undeniably. Well-paid, certainly. But they are people.

We measure injuries or suspensions based on how they impact us first. We gloat when we have a backup running back on our fantasy football who ascends to the lead role because of an on-field injury. We mock our leaguemates who just lost their star player because they got hurt.

In other words, we’re entitled. It’s as if the NFL and its players exist so that we can bet on them in fantasy football.

Here’s the truth — and it’s one that we all know: football is a high-impact and dangerous sport. People will get hurt every season, every week, every game. We are complicit in that because we (and I include myself!!) choose to continue to watch the sport, cheer for players or teams, and play fantasy football (forever).
But injuries are not personal to us. No one is out to get us or help our opponent. No one wants to see us suffer or give us reason to lament. Indeed, if we are upset about injuries, it should only be because we care that it is a fellow human being who is suffering.

We know that injuries are part of the NFL and that fantasy football games and seasons are impacted by them. We choose to play anyway, accepting the risk that the player that we drafted gets hurt. But let’s always keep in mind that it’s a real person who got injured, not just a guy on my fantasy team.

We all have benches, we can trade, and we have the waiver wire. Those are our allies and our opportunities. When a player gets injured, let’s send our hearts out to them and our minds to how we can improve our team.

May Tyrone White’s memory be for a blessing.