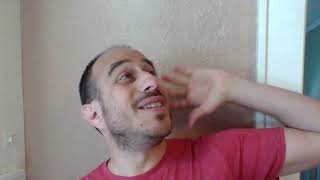 My kids are not particularly materialistic. They don’t often beg or even ask me for new things. And the times that they do, it’s usually because they really do want something. For the most part, I trust their judgment when they ask.

But I do have one rule: If I get you something new, you have to donate some of your current toys or possessions. Initially, that was hard for them — very hard! Remember your days as a kid and being asked to give something up. Remember how much you would cling to what you believed was yours.

We tend to think that we always grow up as adults, and we usually do. But that doesn’t mean that everything gets easier. Open up your garage or your storage closet or the junk drawer in your kitchen. And let’s not even talk about the attic… We all know how much stuff — much of it junk — we still keep. Maybe it’s laziness, maybe it’s nostalgia, but usually it’s the fear of getting rid of something and then shortly thereafter wanting it or needing it.

Put another way: We don’t want to be wrong. We don’t want to throw out our toys from the 90s because they might go up in value and we’d look foolish. We don’t want to get rid of something only to have to go to the store in three months and buy another one. We’d rather keep what we have — even if we’re sure we don’t really need it! — just in case.

In fantasy football lingo, these items (or players) are called roster-cloggers. They’re players that have no function on your team. They’ll never start for you, and you don’t really think that they’ll ever be good. No one wants to trade for them either.

But you just can’t drop him. You’re scared that, next week, he’ll go off, someone else will pick him up, and you’ll like a fool. You’re nervous that you’ll be the guy who gave up on a great player too early. You’re embarrassed that you might then trade for him later, giving up a ton when you could have just kept him all along.

Here’s the scoop: You’re right. All those things probably have happened already and probably will happen again. But far more often, you’ll be hanging on to someone whom you don’t want or need, and you’ll miss out making a transaction that is much better for your team. Maybe you pass on a 1-for-2 trade because, “I have no one to drop” or you don’t pick up an ascending free agent because you’ve been holding on to another guy so long that you just can’t get rid of him.

We get attached to things that are in our possession; it’s human nature. We feel that they are ours, that we are entitled to them. So here’s your litmus test: If the player on your roster were a free agent right now, would you pick him up or not? I’m willing to bet that, almost every time, you’d rather use the spot on someone else.

So clean out your fantasy football attic, get rid of those roster-cloggers, and don’t sweat the times you dropped a later-to-be valuable player. Overall, you’ll gain far more than you lose.

Now, if only I can start cleaning out my real attic…