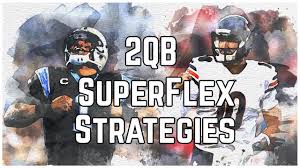 Question 1) I am commissioner of a league where we’ve been talking about potentially changing it to a SF league. I’m struggling with how far away to start this transition. Considering it’s a 1 QB league now, there are plenty of viable QBs on the WW and they fall in drafts. How would you do this? How many seasons should we wait? If we agree to it this offseason, I was going to pitch the 2021 or 2022 draft as being our first SF draft.  (Hank)

First, let’s simplify. Take a poll. If everyone is simply okay with it starting in any given year, be it 2020 or 2021 or 2022, then just do it then. Many players in many leagues enjoy the spirit of fantasy football foremost, and this might be a league where perfect competitive balance is secondary to enjoyment. So, start with a poll.

Otherwise, you’re on the right track: Give teams enough time to prepare, build up their quarterback squad, and/or make trades. 2021 or 2022 would be my targeted years, as well. To help with that determination, I’d look at rosters. Are there lots of QBs on the waiver wire? That might lead to a mad and unbalanced scramble, so you might want to defer until 2022. Are most QBs rostered and relatively well distributed among the teams? Then you could likely accelerate the change to 2021. Just note that the value of early 2020 first-round draft picks will increase quite a lot the earlier the transition happens.

One other transition tip: Even though it’s dynasty, you could also add an unusual caveat. After this season, owners may only keep ONE QB. After next season, two. After 2021, three. And then full-on superflex in 2022. Or, if you are going to start in 2021, then owners could keep two QBs after this year, three after 2020, and then unlimited thereafter. That way, teams can’t stack or hoard QBs now, and the few teams who already happen to have three top-QB options don’t have an nearly insurmountable advantage in the early going.

Question 2) I have my playoff berth locked up. Is it acceptable to throw a game in order to potentially improve my playoff chances? I would start eligible players at all positions, but not necessarily the best options for the week at hand. Thoughts? (Brandon)

Truthfully, I can’t definitively answer your question. Your league should already have in its constitution whether setting a deliberately weak lineup for any purpose is allowed or not. In reality, many or most leagues won’t have things clarified in your constitution. If that is the case, then, by the letter of the law, it’s acceptable (or at least not unacceptable).

I wouldn’t do it, though. To quote Gloria, Rosie Perez’s character in White Men Can’t Jump, “Sometimes when you win, you really lose, and sometimes when you lose, you really win”. You have no idea what the after-effects will be in terms of match-ups, and I think that you’re as likely to hurt your chances as you are to help.

In addition, there’s the ethos of the league to consider. Granted, some leagues are predicated on competitiveness and the whatever-means-necessary model. If that describes your league, then, by all means, go for it. You’ll be applauded — or, more likely, derided, which serves as applause in those kinds of leagues.

Most leagues, however, have a common and underlying sense of being straight-shooting. If THAT describes your league, then I’d strongly urge you not to do this: you’d be going against the principles of your league, which is far more important than trying to force a playoff match-up.

In the end, I’d recommend the following rule addition regardless. Not only does it obviate your question, but it also adds a legitimate benefit to being a better regular-season team. The highest-seeded team in each week of the playoffs gets to pick their opponent. (In some leagues that I have, the highest-seeded team cannot pick the second-highest seeded opponent.) Obviously, if there are 6+ teams playing, then that gets extended to the second highest-seeded team, etc. That way, there is no incentive to tank to improve your match-up, and there is a tangible benefit to finishing with a better record. And there is also very little that is more devilishly delightful than watching someone pick the “worst” team, scoring the second-most points in a week, and losing…