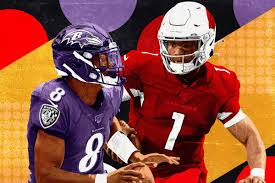 The advent of the running quarterback is not a new phenomenon in the NFL. From trailblazer Fran Tarkenton to Steve Young, from Michael Vick to Duante Culpepper, from Cam Newton to Russell Wilson, running quarterbacks have always been part of the sport. The added dimension that these QBs provided created havoc for opposing defenses and gave fans spectacular highlights.
Of course, a quarterback who can simply run — but not pass — might have fleeting success in the NFL (ahem, Tim Tebow). Being able to throw the ball accurately and consistently is a non-negotiable for any quarterback to stay in the league.
But, having witnessed quarterbacks who can both throw and run over the decades, why hasn’t it become the standard? What has held it back? And will that all change?
Over the years, the running quarterback has been able to dominate a game or even a season. Those quarterbacks, in part because of their unique talent, have rarely been the sought-after model. In addition, defenses could usually scheme against them, selecting a linebacker or safety to “spy” on the QB himself. While the added threat of a running quarterback stressed the defenses by keeping one fewer player available to protect against the pass, it typically did not force a defense to overhaul its system.
A running quarterback was another weapon for the offense but not a game-changer for the defense.
Until now.
Lamar Jackson looks like a historic runner, and Josh Allen and Kyler Murray look to be among the better runners of the past decade. I don’t think that any of them, however, is revolutionizing the quarterback game like Tarkenton or Vick.
If it’s not their impressive running ability that is creating a new breed of quarterback play, then why is the running-QB revolution likely to change the NFL now when it hasn’t before? What’s the new variable?

In a word: schematics. Offensive coordinators and coaches are designing schemes and plays that center on misdirection, attack, and confusion. We’re seeing the majority of teams use various formations, the goal of which is to not allow the defense to know what’s coming. Hand-off? Pass? RPO? Jet sweep? That doubt taxes the defenses in ways never done before. Factoring in the possibility of a QB run — and from a real threat of a running QB — adds a undeniable layer of complexity for defenses to account for.

Many QBs can scramble well. They can get out of some pressure, create time in the pocket, or even lumber consistently for a few yards or an occasional first down or TD. But, they’re not really quarterbacks that a defense needs to account for in their planning. Even Aaron Rodgers, who has great athleticism, scrambling ability, and proverbial “escapeability”, isn’t someone that a defense needs to scheme against as a running quarterback threat.

Guys like Jackson, Allen, and Murray (with Newton and Wilson now settling more into the “scrambling” phase of their careers rather than “running”) create particular pressures on a defense because of the myriad schemes that teams run that weren’t there in previous decades with players like Vick and Young.

The bottom line: all the new offensive schematics position a running quarterback to have success — and not just the game-to-game or occasional year-to-year success of the elite running QBs of the past. Rather, quarterbacks are now poised to have sustainable success within a new offensive vision — something not the case in previous decades.

Running quarterbacks — and the schematics to optimize their abilities — are now here to stay.