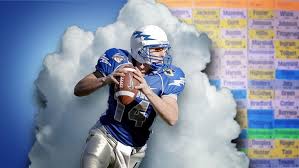 Today’s feature article is written by a guest columnist, sixth-grade student Matan E. Steigmann at Milwaukee Jewish Day School. He wrote this for a school project. It is a fantastic primer for drafting a successful team; there is lots of compelling advice here. Since he’s my son — and since the content is worthwhile! — I am sharing it with you. Thank you for letting me publish this, Matan!

How to draft a Successful Team

Are you playing Fantasy Football but you have no idea what to do? Well, I can help you if you stick around and read this article…

Here are some elements of a fantasy football team we will be covering:

So, how do you do this? You don’t know, keep reading…

When you draft a team the first thing is to never draft a Quarterback till later in the draft because there are much more good Quarterbacks than Running backs, Wide Receivers, and Tight Ends.

What is a Value Pick?

You can figure out each player’s value by looking at how many fantasy football points they had in the previous year and/or get a cheat sheet. Then you can see all the rankings of the NFL players. Let’s say Saquon Barkley (a top running back in the NFL) is ranked #1 for fantasy football and I have the fifth pick in the draft and Saquon Barkley is available. If I pick him that means I got him four picks later than he should have gone. That means I got good value.

How do you draft a successful bench?

Well, the best players you want on your bench are players who once a season have monster games and the other games get around 3 points. The reason is if a star Wide Reciever gets hurt, you can not replace them. That means you would rather have someone who has an 8% chance of having a huge game and a 92% chance of having a terrible game than have someone who gets 5-7 points a game.

How do you know if you have a good value on a trade?

The way you can make a good trade is by offering more people but those people if you add up their weekly point averages are less than the person you want or need (never trade a Tight End, Wide Receiver, or Running Back for a Quarterback. If you want a Quarterback, trade a Quarterback).

When you draft a fantasy football team next, how will you change your strategy? Will you draft a Quarterback first or not? Good luck with your next draft!