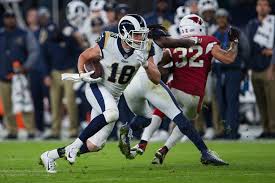 Question 1) Is this a worthy trade I get cooper kupp, kockenson and Josh Howard I give up kelce, Sony Michel and sanu. But I have TJ lockett, Mike Evan’s, hunter Henry, eziKiel Elliott and Christian mccaffery, and Pat’s defense….ppr league. I think this would take me over the top. So far I’m undefeated!! (Edward) [Note: This question arrived before yesterday’s game, and I replied before the game, as well.]

Congrats on your undefeated season to-date, Edward! This is a compelling trade. I anticipate a resurgence from Kelce in the next few weeks, but Hunter Henry has clearly put himself in the top tier of tight ends in 2019. Getting Kupp back as the primary piece for Kelce is both a fair return and also likely the best that you can get. I consider the rest of the players to essentially be a wash. Howard has retained value this season, and Michel is hit-or-miss. Sanu looks to be improved now that he is in New England, but it’s a meaningful upgrade to Kupp. I’m not high on Hockenson the rest of the season. But, with Henry on your team, he’s just depth anyway.
I do think that you’ll miss out on big production from Kelce the rest of the way, but the upgrade to Kupp from Sanu far outweighs the downgrade from Kelce to Henry — which might be minimal anyway. I’d feel comfortable making this deal.
Question 2) I have Mahomes in my dynasty league and I’m a little disappointed with him this year. Watson, Jackson and Wilson are all doing better. So is Mahomes still the best qb? I’m thinking to trade him for one of those other guys and get something else that I could use since they’re basically the same qbs anyway. What do you think? thank you! (Jason)

Quite simply, yes: Patrick Mahomes is still the best quarterback in fantasy football.

If you’re looking simply at points-per-game, then other quarterbacks — like Wilson, Watson, Jackson, and maybe others — will approach or even surpass Mahomes in any given year. I’m looking at more than just PPG, though: I’m looking at how the QB gets those points.

Mahomes’ points come almost exclusively from his arm. Watson’s, Jackson’s, and other ascending QBs’ come in large part from their legs. I will always, always bet on the guy who can produce QB1 numbers with his arm alone. There is a far lesser risk to injury in the short- and long-term and a far greater likelihood of a sustained career. There are simply too many examples of quarterbacks depending on their legs for fantasy points whose careers have been shortened if not derailed by injuries.

In comparing Mahomes specifically to Wilson, who avoids taking hits better than any running quarterback that I have ever seen, even though Wilson should still have many good years left, the age discrepancy can’t be dismissed.

Ultimately, if you want to trade Mahomes for one of those a lesser quarterback like the ones mentioned plus something else of need / value, then I could sign off on that. But, independently, Mahomes remains much more valuable than any of the other three quarterbacks listed — and than any other quarterback in the NFL.