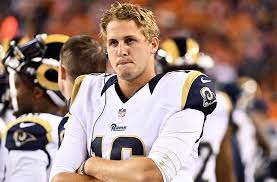 I admit to buying into the Jaren Goff hype this off-season. I considered him a lock for top-8, top-10 production. In retrospect, my prediction for Goff still made sense. He was coming off a season in which he threw for 4,688 yards and 32 touchdowns. The skill position players around him were all healthy and relatively young. Though Gurley’s usage would be a big question mark, they had depth at running back. And Sean McVay is the same coach that led him to his remarkable 2018 season.
Despite all those factors, I forgot one simple but undeniable belief that I have had since Jared Goff entered the league in 2016: he is simply not a great NFL quarterback. He has real talent, and he has proven that he can thrive if all the conditions around him enable him to do so. But having talent is not the same things as being good. Indeed, fooling the Rams — and us — into believing that he is a top-end talent would not be the first time that Goff has duped his team.
It seems like we have all forgotten Goff’s abysmal rookie season in 2016. Even by first-year quarterback measures, Goff’s debut was horrific. He didn’t seem to have the skill, vision, or moxie to succeed in the NFL. Sean McVay’s dynamism allowed Goff to have a miraculously better second season, bumping him up to 3,804 yards and an impressive 28-7 touchdown to interception ratio. We quickly wondered if it Goff’s rookie season was an anomaly.
Everything came together for Goff for the first eleven games of 2018. After those games, he was on pace for 5,159 yards and 38 touchdowns. He would have led the league in passing yards — yes, with even more than Patrick Mahomes (who finished behind Ben Roethlisberger in that category)! — and would have finished third to Mahomes and Luck (by just one to the latter) in passing touchdowns. Ultimately, he finished top-6 in both categories, cementing a remarkable third season in the NFL.
Digging deeper, though, we could begin to see the hints that Goff’s success was system- and coach-driven. In the final five games of the season, with an injured Todd Gurley, Goff only passed for more that 216 yards one time and had a 6-6 TD to INT ratio. Those statistics were reminiscent of his rookie season.
Even more disillusioning are Goff’s playoff numbers. In four games, three of which came last season, he averages 243 passing yards with just two touchdowns and with two interceptions. Though his passing rating improved each of his first three years, it has never topped 101.1 — a good but not great number, especially considering the statistics that he put up.
Adding on his disappointing stats this year — on pace for an productive 4,640 passing yards but with a measly 20 touchdowns and an unacceptable 16 interceptions — it seems clear that Jared Goff had a likely unrepeatable dominating 11-game stretch at the beginning of 2018, impugned on both sides by numbers whose ceiling is more like his 2017 season — very good but not great — and as dismal as this season.
It’s true that the offensive line has been far worse this year, and that position group could improve greatly in 2019 buttressed by free agency and/or trade. It’s also apparent that McVay hasn’t (yet) adjusted his scheme to accommodate for a lesser line and a pedestrian Todd Gurley. Both of those might change next year. But, it’s a difficult sell to suggest that Goff is a top-end quarterback hamstrung by the team around him when the opposite is the hard-to-accept truth: Goff is a slightly-above-average-at-best quarterback buoyed by his coach and system.
As they have started to fade this year, Goff has regressed toward his rookie-season numbers. Indeed, it’s possible that his career arch might more resemble Mitchell Trubisky’s than that of a consistent NFL quarterback.