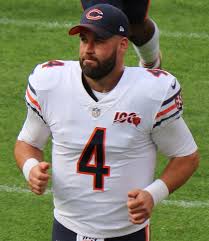 Question 1) You mentioned Tannehill a long time ago and Ryan Finley last week as qbs to get and stash who might play later. Do you have other guys to pick up now who might start later in a 2QB league? Rookies like Lock and Haskins are gone. (Matt)

Chase Daniel. With both Tannehill and Finley, it struck me as probable that the starting quarterback ahead of them would play themselves out of a job. Mitch Trubisky has that same look.

That being said, I think that it’s less likely that Trubisky gets benched than Mariota or Dalton. With them, they are effectively in the last year of their contracts: Mariota is a free agent and Dalton can be released after this year with no cap hit to the Bengals. Trubisky, however, is still on his rookie contract. Moreover, with the Bears having traded their first-round pick in 2020 to the Raiders, they can’t look to draft a replacement. That might compel them to give Trubisky every opportunity to prove himself. But, if he continues to cost them games, then a team that had Superbowl hopes (falsely, in  my opinion) this year might see if Daniel can give them a spark.

heard you on the Fantsy Index podcast and I am also a two QB league enthusiast.
In my dynasty league of record ($100 sal cap) I have an offer for $9 Garapolo and $2 Chark for an $22 Zeke.
I have excellent WRs Hopkin, Juju and Godwin but my best RB is Mixon (yuck)
This will be leave my team with Minshew and Brisset as my starters
Only QB on waiver wire currently is Keenum..
so do i give up the QB security to try and win it all
thanks for reading and your thoughts
Tony (from Massachusetts)

On the surface, Tony, this is easy. Elliott is an elite player at a position with barely a handful of elite options, whereas Garoppolo realistically projects at best as a QB2, and Chark, though an exciting and young upside player, is still relatively unproven. This potential trade, however, has far more layers:

1) Who is getting the better player package?

2) What impact does the scarcity of position at QB have?

3) What are the salary cap ramifications?

The first question, as discussed above, is easily on the Elliott side.

The second is where it gets dicey. If you’re determined to make a run this year, having only Brissett, on whom I am high, Minshew, and maybe Keenum will, in all likelihood, leave you with only one starting QB for the fantasy football playoffs. There is no way that you can comfortably predict that either of Minshew or Keenum will continue to play over the next eight weeks. Adding Elliott might be at the cost of giving you zero points in your QB2 slot in a 2QB league. That’s a massive risk and one that, if realized, is almost assuredly impossible to overcome.
The third question makes this offer even more complicated. At 22% of the salary cap, Elliott is not a noteworthy bargain. Obviously, I’d rather have him than not. But, if he were thrown back into the free agent pool, I suspect that $22 would be closer to what he’d go for than farther off. Garoppolo probably falls is the slightly-underpaid column, but he doesn’t strike me as a terrific bargain, either. Chark, with his oozing potential, could end up a steal. The real issue is what could you do with the extra $11 — out of $100 — were you not to make this trade.
Put it all together, and I’d lean toward passing. As generational a player as Elliott is, I don’t think that you can realistically win with only one QB, and you’d limit your team’s capacity to build in the future (note that there are some great prospective running backs coming in the 2020 draft, and $11 could go a long way to securing one of them).
All that being said, if you believe that you can acquire another quarterback via trade and that adding the extra $11 of salary won’t cripple you in the future — and those are both big “ifs” — then this trade becomes much more palatable. You know your league and trade market best. In the end, my first suggestion would be to explore a trade for another QB. If and when you have that trade agreed to, then you can accept that one and this Elliott trade at the same time.