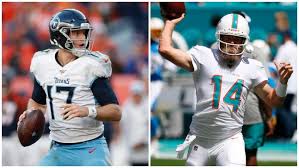 Question 1) What do I do with Todd Gurley? He’s killing my team. Should I sell him? (Nick in Florida)

To me, there are only two questions at play here.

1) Do you think that his knee issue has torpedoed his career?

If yes, then look to sell. Think of what you want, and then accept 80% of that. Holding out for the 100% deal on the hope that he has a bust-out game and that someone will pay more later as a result is likely to torpedo any trade as much as you think that Gurley’s knee has torpedoed his career. Put another way: perfect is the enemy of the good. Seek a good deal, take it whenever you find it, and be glad that you got value for someone that you are convinced is a fast-diminishing asset.

2) Do you believe that what we have seen from Gurley so far in 2019 is the new norm?

If yes, then you want to hold unless someone gives you that 100% offer. He might not be done, but he’s more of an RB2. If someone will give you RB1 value, then you should cash out. Otherwise, keep a player that you believe will still be productive.

If no, then you’re obviously holding. Since you think that he’ll improve, then you’d only sell for 80% of his mid-season 2019 value. No reason to sell low.

I’d like to suggest one other factor to consider. We often follow the equation of talent + opportunity = fantasy football success. Nick’s question has, understandably, focused on the talent part of the equation. Is Gurley permanently diminished? Indeed, we see less fantasy football success and often jump to talent as the reducing factor. I think that there’s a compelling argument to suggest that the opportunity is not what it was. The Rams offense looks like a far lesser offense as a whole than it has at any time in the past two years. It’s certainly possible that Gurley’s talent is at or near where it always has been and that the offense itself is the big hindrance. If that’s the case, then I’d be willing to bet that McVay rights the offensive ship, thereby returning Gurley closer to his 2019 production than his 2020 if you continue to believe in his talent. I’m not suggesting that’s definitely the case, but after just 1/3 of the season, it certainly cannot be dismissed.

Question 2) Hey, Pick up Tanny or Fitzmagic? No one else is left on the waiver wire. Thanks (Adam)

I’m guessing that this is an SF league. If it were a one-QB league, then there’s no way that other starters aren’t available. And, in most 2QB leagues, odds are that one of if not both of Tannehill and Fitzpatrick are gone already.

Of the two, I’m picking up Tannehill easily. Not that I think that he’s necessarily a better quarterback than Fitzpatrick. If you were to put them both on the same team, then I’d take Fitzpatrick pretty quickly. While no one is suggesting that Tennessee is an offensive juggernaut, the reality is that the Titans are in a position to have their quarterback succeed. Their running game is good enough; AJ Brown, Davis, and Walker can catch the ball well enough; and their defense is strong enough to keep them in games. That will give Tannehill the opportunity to succeed.

Miami, of course, is atrocious. They haven’t even been able to put up meaningful statistics in garbage time. And Fitzpatrick has already lost the job once. There’s no reason to presume that he will either be successful this time around or keep the job for the rest of the season.

Question 3) What effect will losing Mahomes have on the Chiefs players? (Dajan, Omaha)

Buzzer-beater question, Dajan, as this came in as I was ready to publish my mailbag!

Obviously, it’s a major downgrade in the passing game going from Mahomes to Matt Moore. Mahomes at quarterback gives 350+ yards and 3+ TD upside — and an upside that’s not unrealistic. Those numbers can support multiple elite producers every week, giving #1 overall potential stats to Hill, Kelce, and even a lesser WR who busts out for a game. It also helps keep Damien Williams relevant, as most of his limited production this year has come via the pass.

With Moore at quarterback, it severely limits Hill’s and Kelce’s upside. Still, their floors are relatively intact. Though Moore himself is nothing but a low-end QB2 at best, even lesser numbers from him can sustain two high-level pass-catchers. In addition, we have seen this year with Kelce a lower floor than expected, and we have seen Hill last year taken out of some games. That means that you continue to start both with confidence — they’re still positional one players (i.e., top-10 WR and TE) with a stable enough floor but a reduced ceiling.

It’s the lesser pass-catchers that will suffer. Robinson, Hardman, Pringle, and, whenever he returns, Watkins have minimal if any value while Mahomes is out.

The running backs shouldn’t be affected too much. None has had an incredibly productive game (save touchdowns) this season. Not having Mahomes might reduce their productivity as defenses could key on the running game, but the volume should increase, as well, if last night’s game serves as a prediction of future performances.

Bottom line: Keep starting Hill and Kelce confidently, McCoy and Williams only if, out of need, you have been already, and bench everyone else. And, of course, hope that the early prognostication of a three-week absence for Mahomes doesn’t turn into anything longer — which it likely will if ligament damage appears on his MRI.