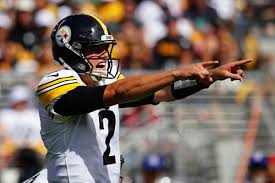 1) I lost Mahomes to injury in my 2QB Dynasty league, and I’m trying to decide on fair market value for Mason Rudolph as a fill in for the next 3+ weeks. Are you a believer? With Big Ben still kicking, does Rudolph play at all next year, even if he’s successful this year? (Aaron, Toronto)

We often employ the equation that talent plus opportunity equals success. For a young unproven QB with both talent and opportunity (e.g., Daniel Jones), I think that a 1st-round pick is a good starting point for trade discussions. For a young proven QB with unknown talent and no clear opportunity (e.g., Ryan Finley — whom I think is a buy-now (and you can read more on that below)), I think that a 3rd-round pick is a good starting point.

Rudolph is an intriguing case. One could argue that he has talent — he was a 3rd-round pick and the Steelers seem to believe in him — and opportunity — Roethlisberger is out for the year. One could also argue that his talent is unknown — unlike Jones, Rudolph hasn’t flashed yet — and that his opportunity is limited to 2019.

That makes the middle ground of a 2nd-round pick a reasonable starting place. For me, I think that he’ll be good enough to stay in the NFL for a while, but I’m not yet sold on his talent. And while Roethlisberger is slowly starting to creep into end-of-career Favre territory, where there will be the constant will-he-or-won’t-he play next year question, I’d bet on Roethlisberger playing in 2020, thus severely limiting Rudolph’s short-term opportunity. His best-case scenario is balling this year and then perhaps being traded in the off-season. But I don’t think that I’d be willing to give a 1st-round pick to find that out.

One other option: if you’re looking for a Mahomes fill-in, then I’d strongly consider going the cheaper route and would inquire about Moore (if he’s not available), Kyle Allen, or even someone like Flacco or Dalton just as a warm body.

2) I’m in a 12 team 6 point / td dynasty league where all the qbs are rostered. People love qbs in this league and they get traded a lot. I’m looking for some qbs that you think have looked really good or really bad. I want to try to get qbs that have looked good and maybe flip them for more or keep them or get rid of qbs that have looked bad. (Brian)

As a general rule, Brian, I think that trading for a player in hopes of flipping him for more later tends to be riskier than it’s worth. You might not recoup value, and you’d be stuck with a dead player on your roster while itching to trade him. But, there are some leagues — and it sounds like yours is one of them — where trading is constant, so I do see the appeal there.

Three guys jump out at me as players whose value will increase: Brissett, Rodgers, and Stafford. In almost all scoring systems, Brissett is a top-10 quarterback. Frank Reich knows how to design an offense, and Brissett has great skill position players and a strong defense to support him. People seem late to the Brissett party. I’d buy him — and happily keep him if you can’t flip him.

Regarding Rodgers, I had suggested earlier this season that it would take the Packers offense about six weeks to get into gear. That was quite prescient. Buying into LaFleur’s system, Rodgers seems to have figured out how to both be productive within it AND avoid taking frequent hits on rollouts, a staple in McCarthy’s previous offense. While I don’t predict that 6-touchdown games will be the norm, I think that Rodgers has a floor of a QB1 with the renewed upside of an elite QB. And I think that LaFleur’s system is the elixir that Rodgers needs if he does indeed plan to play into his 40s. He could be a QB1 for another 5+ years.

I’ve never been a huge Stafford fan as a fantasy quarterback. I think that he’s primarily living off the reputation of his monstrous 2011 season and off the fact that Detroit, historically, has passed the ball as much as any other team. Their offense has evolved this year under Darrell Bevell, and Stafford has to date his highest QB rating of his career. Much like LaFleur is doing for Rodgers, Bevell seems to be designing an offense where productivity increases even if volume decreases. Russell Wilson had fantasy success in that model, and it looks like Stafford might, too.

I’ll also add Ryan Finley as a buy-now. I’m convinced that he’ll be starting soon in Cincinnati (more on that below…).

As for players whose value could plummet, you’re always targeting aging quarterbacks. While the aforementioned Rodgers is an exception for me, Rivers seems like the non-obvious choice here (Brady and Brees being the obvious ones). The offense doesn’t quite seem to be clicking, and I’m not sure how much longer he is going to have the passion for football necessary for him to keep playing.

Other clear answers are starting quarterbacks who could lose their job. Dalton is a top choice for me in that category, and I have been continually unimpressed by Trubisky. Flacco fits the bill, as well.

The problem with trying to sell these guys is that no one is valuing them too highly now. But, you might find a window some time in the next couple of weeks to trade them at what might be their likely highest value.

One other name: I’m not a believer in Dwayne Haskins. And I’m certainly not a believer in the Washington organization. Unlike other players whose value usually increases when they are given an opportunity, I think that Haskins’ will decrease once people see him play. If you can find a trade partner now who believes, then I’d move him. Otherwise, he could be a great flip candidate: buy now while he’s likely on the bench and trade him when he is announced as the starter. I feel similarly about Drew Lock, though you’ll likely have to wait until 2020 to flip him.