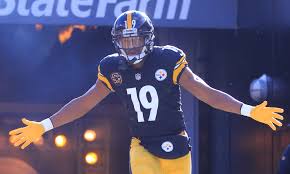 Stud wide receivers produce regardless of circumstances. OBJ produced with Eli Manning, Michael Thomas has looked good with Teddy Bridgewater, and DeAndre Hopkins has been elite with quarterbacks marginally better than my ten-year-old son throwing him the ball.

The axiom of stud WRs producing in all situations led me to read a social media post suggesting that JuJu Smith-Schuster is not only not a stud but is nothing more than an over-hyped wide receiver who succeeded only due to playing opposite Antonio Brown in 2018. He offered one sole argument: JuJu is currently on pace for a 2019 stat line of 68 catches, 1,032 yards, and 4 touchdowns — because Antonio Brown is gone. Not a stud, never was, and never will be, he concluded.

I then decided to play the small sample-size game with JuJu Smith-Schuster, and I replied to the post with something similar to this:

You took JuJu’s four-game stretch in 2019 as proof that he isn’t a stud without Brown. So, I’ll take the first four games of JuJu’s career that he played without Brown.

Let’s keep playing anyway. Take out the Cincinnati game from this past week (hey, it’s small sample sizing, so I can do what I want!) and just focus on the first three games of the season — only half of which were with Ben Roethlisberger before his injury. He would project for a 16-game stretch of 75 / 1,296 / 5 (70% catch rate). If you told me that Big Ben would play 1 1/2 games this year and that JuJu would finish would those numbers, then I’d take it in a second. He has to be damn good to put up those numbers (and his in-game stats were almost identical with and without Big Ben in the line-up over those first three games).
Of course, those four-game samples and that three-game sample are pretty arbitrary. There is only one thing that I would argue conclusively: you can’t extrapolate convincingly off a four-game sample size, especially one with a major extenuating factor (i.e., the loss of Roethlisberger).

The question of whether or not Smith-Schuster is a stud ultimately comes down to one thing for me: JuJu has put up extraordinary numbers his first two years in the league — extraordinary. It’s hard for me to imagine what else a player needs to do to be considered a stud (or, minimally, on the clear and direct path to being called one).

Days later, and I still haven’t received a reply from him.