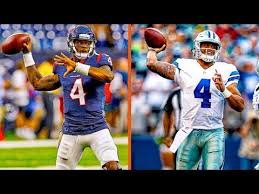 Prescott has been fantastic this year. Moreover, in games that both he and Elliott have played over their careers, Prescott is consistently a top-10 quarterback. Plus, the addition of Cooper alongside the ascendance of Gallup and the return of Witten give Prescott a legitimate group of pass-catchers. And the offensive line is elite. Put another way: I think that Prescott is set up for sustained success, and I’d be willing to buy at low-end QB1 prices.

But not at the cost of Watson.

Like Prescott, Watson has an impressive group of pass-catchers. Unlike Prescott, however, he doesn’t have the elite running back or offensive line to buoy him. Nonetheless, Watson is simply a better — a far better! — quarterback. He has more talent, and he has consistently put up more fantasy points than Prescott throughout their brief careers. I see no reason to bet against that continuing.

We should also factor in to some degree the quality of the opponents that each has faced in the first four weeks. The Cowboys have played against three of the worst defenses in the NFL in the Giants, Redskins, and Dolphins. Averaging three passing touchdowns against that trio of teams is impressive, but only passing for more than 269 yards in one of those game isn’t. Against his only test — the Saints — he passed for 223 yards, no TDs, and one interception.

Watson’s opponents have been far stingier, ranking among the NFL’s best against the pass: the same Saints, the Jaguars, and the Panthers. Indeed, against the Saints, Watson had far more success, throwing for 268 yards, 3 TDs, and 1 INT. He admittedly struggled against the other two strong defenses, but he had a monster game against his fourth opponent, the Chargers.

Looking at their respective remaining schedules, neither Watson’s nor Prescott’s have a distinct advantage. They each have some tough match-ups and some cake-walks ahead.

That being said, I anticipate the Texans starting to scheme more to protect Watson, and I am far more compelled by Watson’s elite history and projected ceiling than wary of his increased injury risk. I’ll take Watson here without hesitation.