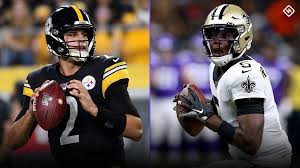 After a shocking week of injuries and benchings, as many as five first-time starting quarterbacks (yes, I’m including Teddy Bridgewater here) could be starting in Week 3. Grabbing on to the right one in a redraft league could be the key to surviving the next few weeks, and identifying the best potential dynasty assets might be a spark plug for your team.
So here are each of the potential new starters this week based on who makes me Excited and who makes me Nervous.

Kyle Allen — Excited: Admittedly, there is some blind optimism here. But, if Cam Newton misses the game against Arizona, he has shown the eagerness and moxie to succeed. Having Christian McCaffrey, DJ Moore, Chris Samuels, and Greg Olsen catching passes from him makes QB2 numbers a realistic enough possibility that I’m excited to see him play.

Teddy Bridgewater — Nervous: I know, I know: he’s not a first-time starter. But, he hasn’t had a starting position since 2015. His team has changed, and it’s still entirely unclear what impact his horrific injury has had on his game. Not that his quarterbacking was particularly fantasy-friendly to begin with…

Predictably, I don’t think that Bridgewater has any ceiling beyond a game-manager. He has never thrown for 3,232 yards or more than 14 touchdowns in a season. He has impressed me as someone who makes smart decisions and the plays necessary to help his offense, but I don’t see any upside beyond the stereotypical game-manager profile. I’d let someone else draft him in a re-draft league. There is some appeal in dynasty, in that you might be able to flip him for more if he has any success. But, I wouldn’t be looking at Bridgewater to have a Foles-like impact, parlaying a successful stretch of games into a lucrative starting position.

Luke Falk — Nervous: Feel free to add him if you must. I don’t see a path to meaningful statistics, and he’s only starting until Sam Darnold is healthy. While Le’Veon Ball catches the ball perhaps better than any other running back in the NFL, the rest of his pass-catchers are potential up-and-comers rather than proven players. Even in a redraft league, he’s barely worth a roster spot save the most desperate of situations.

Daniel Jones — Excited: In the pre-season, Jones shined. He looked decisive, and his short-game accuracy was as good as advertised. Surprisingly, he displayed more arm strength than anticipated. What has me most excited, besides his pre-season performance and confidence, is his cast of pass-catchers. No, that’s not a typo. The Giants have no elite wide receiver, but Barkley and Engram profile at the top of the athletic range at their respective positions. And they have both proven to be highly productive in their brief careers.

What really makes me excited is the wide receivers. Sterling Shepard and the soon-to-be-reinstated Golden Tate are strongest in the short-range game; that plays to Jones’ strength. Add Barkley and Engram to the mix, and I think that Jones is poised for success.

A note of caution is essential: while Barkley as a rusher will help take the pressure of Jones, the offensive line remains disastrous. It’s not improbable that Jones has typical rookie struggles throughout the rest of year, compounded by lots of sacks and pressures. Still, he intrigues. In Dynasty, he’s a buy or a hold. In a redraft 2QB/SF league, he’s a must-add if available.

Mason Rudolph — Excited: Like Jones above, Rudolph has talent at the skill positions around him. JuJu Smith-Schuster is pushing himself toward the elite tier of WRs, James Conner has shown reliable hands, Jaylen Samuels is a play-maker catching the ball, and Vance McDonald is a dependable safety valve. In addition, the offense and team around Rudolph are excellent. Everything is in place for him to succeed.

Rudolph has also been in the Pittsburgh system for two full years. Reportedly, he prepares with rare diligence. The combination of his relative longevity with his team, draft profile, and surrounding cast make him the undeniable preferred option in a 2QB/SF redraft league — in addition to the fact that he is all but guaranteed the starting job for the rest of the season.

His dynasty future is a little clouded since Roethlisberger is expected to return in 2020. But, that’s a full year off. A solid showing could insure his future success in the NFL.