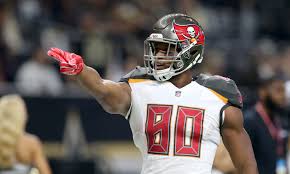 Submit your mailbag questions here, and keep an eye for future editions of the Mailbag!

Question 1: I think that it’s time to P-A-N-I-C on O.J. Howard. He didn’t get a single target yesterday. Are you worried? (Mike)

For the moment, I’m willing to chalk it up to Arians wanting to protect Winston more after Week 1 and help get the running game going. Howard is a fantastic athlete and pass-catcher, but he’s also a fantastic run and pass blocker. Indeed, if we think back to when he was drafted, he was high on boards because his blocking insured that he wouldn’t come off the field. That’s an asset, one that Arians has been using.

That being said, there is cause for concern that this is more of a trend with Arians than a blip. We’ll have to wait over the next few weeks to see if Arians tries to use Howard’s receiving skill set or leaves that for Brate, a far less reliable blocker.

Question 2: I know that you’re high on Jacoby Brissett. Why? What about after Week 1? (Kitt)
Before the season, I believed the following to be true:
He held his own after a last-minute pre-season trade to Indy two years ago.
He has a fantastic team around him.
Frank Reich knows how to build an offense.

Nothing has changed my mind after Week 1. I’m still buying while his value is cheap or holding if you already own him.

Question 3: Are you more nervous about Winston or Newton after yesterday’s game? They both looked terrible. (MJ)
For 2019, I’m not overly nervous about either. Winston will have some low-floor games, marred by poor decisions and/or turnovers. He’ll have some monster weeks, as well. Anyone who drafted him to be a consistent QB1 will be disappointed, but most people drafted him primarily for his upside; that’s still there.
Newton is trickier. His health always seems to be in question, and correlated to that is his rushing production. Except for his MVP season in 2015, he hasn’t proven to be a consistently reliable passing quarterback. Still, I haven’t seen enough in these first two games to suggest that he’s done. He has enough pass-catching weapons around him to keep him just barely good enough even with limited rushes and still has the talent — both with his arm and his legs — to put up big numbers. His larger body of work suggests that’s more likely to happen than not.