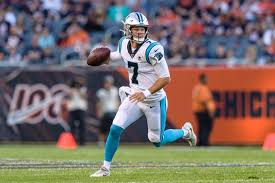 Submit your mailbag questions here, and keep an eye out for weekly mailbags!

Question 1: Start Kyle Allen or Joe Flacco as my 2nd QB this week? I lost Big. Ben, then got outbid for Mason Rudolph. Also, I’m a little behind in my head-to-head game after Thursday night’s game. (Mike P)

Kyle Allen. Admittedly, my first instinct was to justify this call, anticipating some shocked reaction at its boldness. Taking a quick step back, though, I don’t even think that it’s particularly close. If both Kyle Allen and Joe Flacco were going up against league average defenses, then I think that there’s a discussion to be had. Both have low floors (though Allen’s is absolutely lower), so you’d really be debating between the higher upside of Allen versus the reliability of the veteran Flacco. I’d still likely chase the upside in that scenario — especially given your early-game deficit this week — but that would be a reluctant recommendation on my part.

When looking at the match-ups, however, it becomes an easy call for me. Green Bay has shown to be an elite defense after two weeks, and Arizona has shown to be vulnerable. Don’t get me wrong: Starting Allen comes with an abysmally low floor, even lower than Flacco’s against Green Bay. But I’d still roll the dice with Allen without thinking too hard or fretting the results in the event that he bombs.

Question 2: Daniel Jones is my QB3 but I’m stuck with no one to start in the RB2 spot. I could get Singletary for Jones (dynasty league). Who would you rather have? (elphie)

Jones easily. I had him higher than Singletary after the draft in both SF and 2QB leagues, and even more so after the pre-season. I don’t think that Singletary is going to have the kind of monster rookie year to justify taking his 2019 production over Jones’ projected career. Not even close, IMO. I’d find an RB2 elsewhere.

Question 3: I have an extra roster spot. Should I hold Luck? (Andrew’s Fan Club Founder)

No, you shouldn’t. His retirement is reminiscent of Barry Sanders and Calvin Johnson: he’s not coming back.