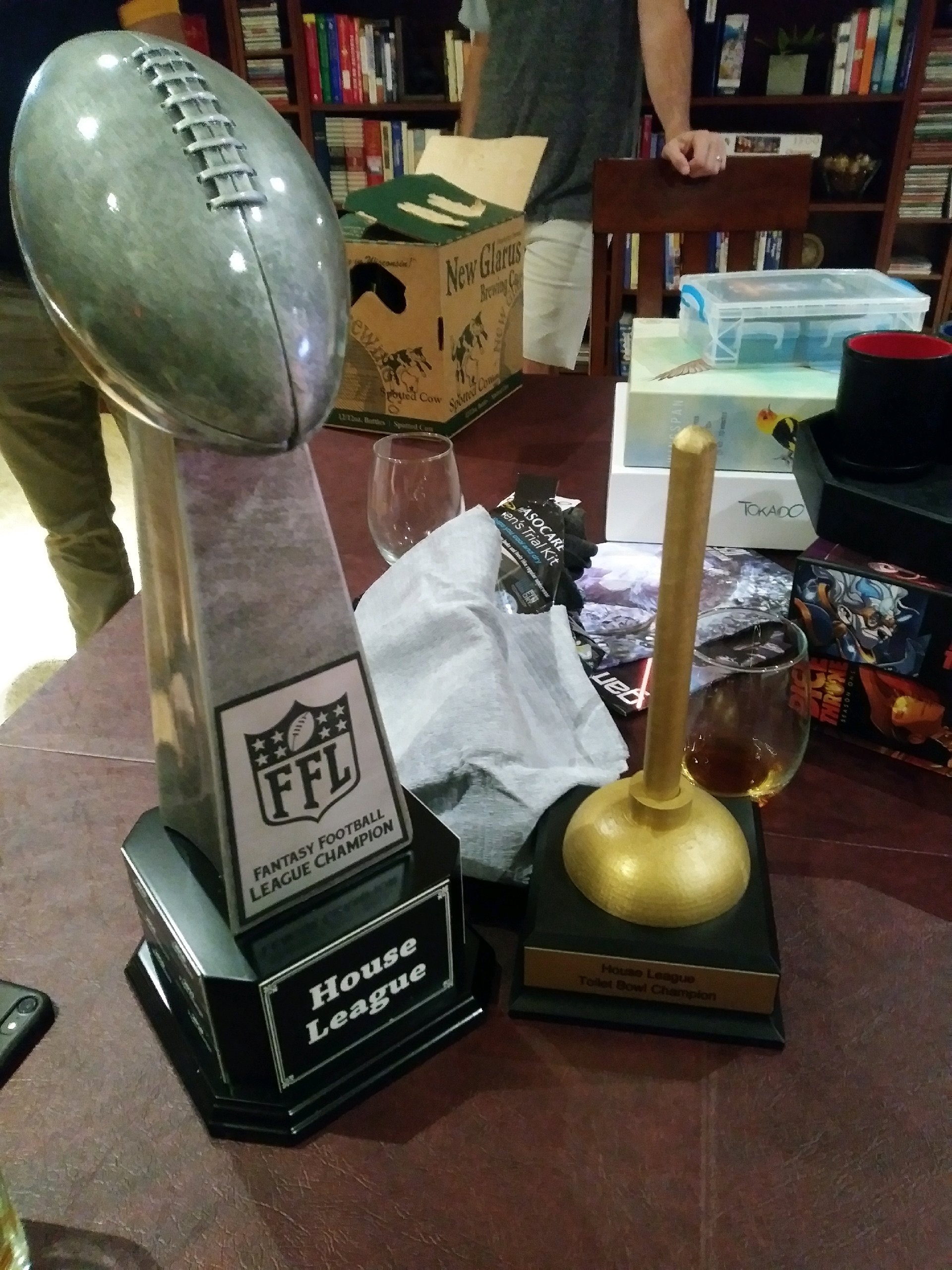 It took 25 years. That the House League, started in 1995 with five other college friends, is now entering its 25th year is remarkable. We original six owners are all still in the league along with four other long-time additions. Our annual draft weekend brought together nine of the ten of us, with the tenth only unavailable late in the game when his wife’s work shifts were switched. 25 years of fantasy football and, more importantly, friendships.

But only one season with real trophies.

We’ve talked about it for around a decade: the need for a championship trophy and a Toilet Bowl trophy. 24 years later, Collin, our defending league champion, surprised us all over the weekend with two engraved trophies for our league. Money on the line? Absolutely. Bragging rights for years? Undeniably. But now we have the real prize: hardware to display all year round for the both the best and worst of us. So, yeah, I was uniquely motivated this year to do well at our live auction…

*Note: Essentially a redraft league, The House League has some innovative salary cap rules and also gives real value to money left over from the auction. Rather than explain them all here, let’s consider the effective starting auction budget to be $215.

Here are my team’s results:

Let’s start at the back end: We drafted last Friday, the day before the news of Andrew Luck’s retirement broke unceremoniously. I absolutely targeted Brissett as a late-round $1 pick in the event that Luck would miss a few games, but that lottery ticket cashed in far earlier and for far more value than anyone could have anticipated.

In a Superflex league, I always aim for at least three viable starters. I suspected before the auction began that the later quarterbacks would go for more than they should as teams who were left out of the early QB-bidding wars were forced to overspend for the final available starters. That proved prescient, as both Ryan and Mayfield went for far lower than they should have, and Newton ended up being less than three second-year QBs (Allen, Darnold, and Mayfield, the last of which is not surprising), Kyler Murray, and other notable veterans (Wilson, Brees). I ended up stacked at QB, amazingly with value all the way through. That allowed me a luxury pick at a later position and to acquire a second targeted running back.

James White was my primary target as an upside value player. It’s a half-PPR league, and I surmised that he would go for less than he should, returning tremendous value and productivity as an RB2 or Flex player. $4 was less than even I had hoped, but the inflated wide receiver values dropped the prices on running backs. I also anticipated owning either Gurley or Gordon, and the surprising reduced prices at quarterback allowed me to acquire both. I’m less worried about their injury and holdout respectively than others, and Malcolm Brown (whom I have since picked up) and Justin Jackson are viable fill-ins — along with the aforementioned White. They came at a discount relative to the other top RBs, and I am thrilled to add both of them to my roster, one that should be strong enough to win enough games in their absences to stay afloat for when they are both playing.

I knew that I’d get “crushed” here — at least by perception. I also entered the auction foreseeing incredible values somewhere among the top-30 wide receivers. My hope was to acquire some of the players that I did at a relative discount, getting potential-tier jumpers at value. Indeed, I think that each WR on my team has a legitimate possibility to far outperform his auction cost, and I would have not have believed before the auction that I could acquire this quartet for less than 20% of my auction budget.

Notably, I only have four WRs in a start-3WR, Superflex, and an additional flex spot league. That’s low, and that’s also somewhat purposeful. The waiver wire is full of capable fill-ins and upside flyers, and I would rather round out my roster with QB, RB, and TE flyers (as I did) given the plethora of WR options still available. I do expose myself to risk with a WR injury or underwhelming season, but no roster is without holes after an auction or draft. I’m comfortable with this being my major hole.

I overspent on Kelce. There’s no way around that. Michael Thomas, for instance, also went for $39. But, if you listened to my fantasyindex.com podcast on which I was the featured guest, you wouldn’t be surprised. Anticipating the value that I could get at WR, I decided that Kelce was worth the inflated price, giving me essentially a WR1 in the TE slot. The only downside is that I knew that I would miss out on massive value at TE later, as some of the mid-TE1s indeed went for only $4-$6. So be it. I wanted Kelce in this league given the half-PPR status and his positional dominance. I paid about $5-$7 more than I had anticipated, but I more than made up for it given the values that I found at both quarterback and wide receiver.

I’m a Dallas Goedert believer, perhaps as high on him as anyone. I think that he’s a legitimate top-12 TE prospect this year even if Zach Ertz plays all sixteen games. And in the couple of games that Ertz is likely to miss, he’s a locked-in top-4 TE. He’s my breakout player for 2019.

The delightful frustration of auctions is that they are almost entirely unpredictable. All the variables converge to create too many factors to accurately predict, leading to picturesque chaos. Indeed, I was more shocked than anything else that this particular auction went almost entirely to script — and even exceeded it. My plan was to acquire two top-10 QBs with an upside play at QB3, one stud RB along with James White and upside players on the bench, a collection of undervalued but high-upside WRs, and Travis Kelce and Dallas Goedert specifically. Not only did I meet and exceed all those expectations, I ended up with 7 highly-valuable free agent auction dollars left over, the fourth-highest number in the league.

There are a lot of strong teams this year, more so than in most. Still, I can’t ignore the possibility that the championship trophy will be with me all next year. I greatly welcome any thoughts or suggestions on how to help make that happen!