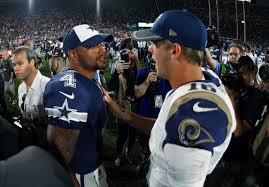 We all know that statistics provide incomplete information. Without a context, they don’t tell us the important part of a story. Less important than raw numbers is whether they are indicator of good or poor numbers in the future.

In some cases, the stat-line accurately reflects the quality of a quarterback’s game. In other cases, the stat-line does NOT accurately reflect how well or poorly a QB played in a particular game. In this column, I’ll take a look at some players whose stat-lines undersold their performances and some players whose stat-lines oversold their performances. This is particularly helpful as you make buy and sell decisions!

Dak Prescott: The final numbers aren’t pretty: 160 passing yards on 16/25 attempts with only one touchdown against a less-than-elite Giants defense. The hidden statistic here is that Prescott took zero (!!) sacks. His ability to evade pressure, get rid of the ball, and NOT throw a pick all speak well. A healthy Ezekiel Elliott alone cannot overcome a shaky line. But, as the line improves, so will the prospects of the entire Cowboys offense. Prescott made smart plays with his head and elusive plays with his feet (45 yards rushing). Better numbers should be coming.

Ryan Tannehill: Posting almost identical statistics to Prescott, Tannehill threw for 168 yards with 2 touchdowns, no interceptions, and 44 yards rushing while completing 17/23 attempts. Granted, his two fumbles are red flags, but his efficient performance combined with his high yards-per-attempt average against an underrated Jets defense cannot be dismissed. If he continues this level of play, then it’s realistic to expect that Tannehill will get more opportunities to throw the ball every game.

Jared Goff: How could a quarterback who threw for 354 yards be on this list? Well, just one TD and one INT will do that. The hidden statistic is Goff’s yards-per-completion, as he complied his stats on just 24 (!) caught balls, the second-highest YPC average this week (more on the highest guy later…). It’s an impressive number, and the fact that it came on just 32 passes shows that Goff not only throws but, more importantly, completes multiple deep passes every game. The TDs will come.

Joe Flacco: When you see 376 yards passing and 2 TDs, you get impressed. When you add in 3 turnovers — two interceptions and one lost fumble — and the fact that it took 55 passes to get those yards, the stat-line gets worrisome. Factor in that Flacco’s 55 throws yielded just 32 completions, and you begin to see the deception in his final numbers. That Flacco is willing to throw deep is great; that his efficiency is so poor does not bode well. He’ll have some dud games, especially since he is unlikely to continue to throw this many passes.

Eli Manning: His numbers don’t jump off the page, but completing 75% of your passes (33/44) for 279 yards with no turnovers is solid. The rub is not that he threw just one touchdown. Rather, far too many of his passes were safe dump-off throws. He looks unable to drive the ball deep and to create big plays. Efficiency is one thing; limitations are another.

Finally, there’s Ryan Fitzpatrick (the aforereferenced player who led all QBs in yards-per-completion). I’ll admit that I didn’t see this happening two weeks in a row. I’m not convinced that a third is on the way, but I must recall the words of our illustrious past president, George W. Bush.

Any QBs whose performances you think undersold or oversold them? Let me know whom I missed!