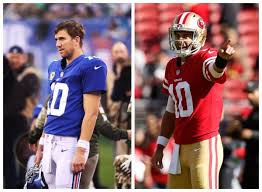 We all know that statistics provide incomplete information. Without a context, they don’t tell us the important part of a story. Less important than raw numbers is whether they are indicator of good or poor numbers in the future.

Eli Manning: With just 224 passing yards and no TDs, Manning’s final stats were unimpressive. When you consider that he completed 23/37 passes against the best passing defense in the league — and that Beckham, Jr. looks as dominating as ever — it’s clear that most of his weekly finishes will be far better than this.

Jimmy Garoppolo: Ugh. 15/33 with three interceptions for one of the most-hyped off-season quarterbacks. Ugly. Yes, Minnesota’s pass defense is elite, but this was still an abysmal showing. Keep in mind that some dropped passes had a big effect. While some of Garoppolo’s throws showed how raw he still is as a QB, he made some eye-popping plays, as well. If he can clean up some of the mistakes — and he won’t be playing against Minnesota every week — then he has a chance to live up to the pre-season hype.

Kirk Cousins: He finished with solid numbers (20/36, 244, 2/0). I include him here because he simply looked the part running Minnesota’s offense. He made some elite-level QB plays and has a team of justifiably highly-regarded pass catchers in Diggs, Thielen, Rudolph, and Cook. While I don’t consider him likely to join the elite level of quarterbacks in 2018, I do think that he will have quite a few top-level performances.

Tyrod Taylor: 77 rushing yards and a touchdown give most QBs a huge bonus to their point total. 15/40 passing, with an uncharacteristic interception for Taylor, don’t play well. I’m willing to give Taylor a wind-induced mulligan (Roethlisberger was quite off in this game, too…), though.

Case Keenum: 329 yards and 3 TDs on only 39 passes is quite impressive. Considering that they were playing the Seahawks defense — which is a bottom-level defense at this point — and that he still managed to throw 3 interceptions clouds the statistical bottom line. His mistakes against a lesser defense are a concern for when he plays better opponents — and he will!

Ryan Fitzpatrick: It’s only the rushing (12/36/1) that’s unsustainable. I fully expect 400+ yards and 3+ TDs every week until Winston returns. 🙂

Any QBs whose performances you think undersold or oversold them? Let me know whom I missed!