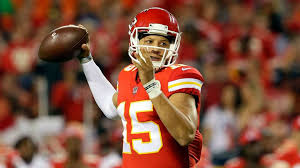 I’m not an investor. Clearly. Take my advice to play the stock market, and you’ll be out on the streets faster than Daniel Carlson.

In fantasy football, however, you don’t always have time to wait for market corrections that will never come or for the optimal buy player and/or sell period. Sometimes you need to buy or sell now because of your record, because of injuries, or because weeks in the season are simply running out.

While it’s preferable to buy a struggling player that you expect will explode or to sell a impressive player that you expect will implode, sometimes you need to do the opposite. With that in mind, occasionally throughout the season I’ll list my buy-high quarterback candidates — quarterbacks who are excelling and are worth the investment cost — and my sell-low candidates — quarterbacks who are struggling and should be sold for what you can get.

Patrick Mahomes: He’s my QB1 for the rest of the season. He has an excellent offensive-minded coach who believes in him and exceptionally skilled players at every offensive position. With thirteen touchdown passes in the first three weeks, he broke the previous record of twelve by Peyton Manning in his remarkable season in Denver. Mahomes will cost you a lot, but he’s worth it.

Cam Newton: He has no offensive line, his best target (Greg Olsen) is injured, and he plays on a lesser team in a competitive division. Yet, through three games, he is a top-6 quarterback. His rushing production will always keep his floor high, and he has no running back to eliminate his goal-line carries. Christian McCaffrey is an elite pass-catcher at running back, and all the other peripheral factors should improve. His floor remains high, and his ceiling has room to grow.

Dak Prescott: He’s on an anemic offense even with Ezekiel Elliott present. In a dynasty league, I still see him as a viable player (and he could be a buy-low candidate in those settings). But, for 2018, it’s hard to see him returning to his incredible level of production in his first two season in games when Elliott played. His offensive line is struggling with injuries, and he has no reliable position player to catch the ball. It should be 2019 before he begins to ascend again to the top half of quarterbacks. If someone else still believes that he’ll return to his earlier form this year, then let him hold on to Prescott while waiting.

Mitchell Trubisky: He’s simply not that good of a quarterback. It’s possible that he can be coached up, and it’s possible that Bears coach Matt Nagy could put in place an impressive offensive system. And give the Bears credit for finding talented pass-catchers in the off-season. But, new wide receivers and tight ends often take time to gel with their quarterback, and Trubisky doesn’t even look much improved from last year. Sell while Trubisky retains some of his off-season hype.

Jimmy Garoppolo: In the off-season, I saw Garoppolo ranked in the top ten of dynasty quarterbacks. I always considered that too high. Yes, he went 5-0 in his end-of-season starts last year, but his passing numbers from a fantasy perspective were average. Shanahan can put together productive offenses, but the notion that Garoppolo automatically vaults into elite status is simply wishful rather than grounded. Someone who still believes might “only” pay top-12 or top-15 QB prices after his ACL and MCL injury yesterday, but that’s a deal worth taking: I’m not convinced that he will ever ascend much higher than that as a fantasy football QB.