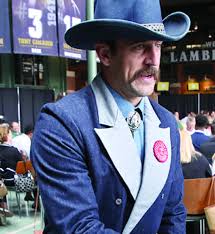 Aaron Rodgers recently signed a record-breaking 4-year, $134 million contract extension with $103 million guaranteed, adding on to the two years remaining on his current deal. Incentives could push his total compensation to potentially $180 million.

What does Rodgers’s real-life deal teach us about our quarterback search in fantasy football, particularly in superflex and 2QB leagues?

They’re game-changers. They’re irreplaceable. You have pay to acquire or, in some leagues, keep them. But they are undoubtedly worth it.

There is often a temptation to try to sell high. Don’t. If you have an elite QB, the most precious of commodities, keep him as long as you can. Of course, there are exceptions. The Packers themselves moved on Brett Favre, and we saw Joe Montana and Peyton Manning play for other teams at the end of their careers, as well.

Maybe you’re in the infancy of a rebuild, and trading stud quarterback is advisable. Exceptions, however, should never be used as paradigms.

Just because you have the best player at the most important position doesn’t mean that you can sit back, relax, and count your championships. You still have to work diligently not only to maintain but also improve your team. Rodgers himself said it best when discussing whether his new contract makes him a Packer for life.

“I don’t think this guarantees anything… To get to the end of the contract would be sustained, consistent play. So, that’s the most important thing.”

Having a stud QB guarantees nothing. Keep working at your roster every day!

Yes, some quarterbacks age faster than others. But, no need to panic the moment a QB hits thirty-five.

Yes, elite QBs are worth the cost to acquire them — but not more. That seems contradictory, of course, so read on. Every market has a value for its top quarterbacks, and you’ll often have to pay market price. But, if you go overboard, it can set you back too much to be able to field a team around your signal-caller. Indeed, while Rodgers’s contract is the richest ever both in terms of annual salary and signing bonus, it doesn’t shatter the previous highs. In fact, while record-breaking, his contract still gives the Packers space to acquire additional and maintain their current players. Rodgers even acknowledged that allowing the Packers to maintain financial flexibility was essential.

“I feel like the team is happy with the cap numbers and they still feel like, [general manager] Brian [Gutekunst] still feels like he can put together the kind of team he wants to put together.”

Finally, look again at what Aaron Rodgers wore when announcing the signing of his contract!