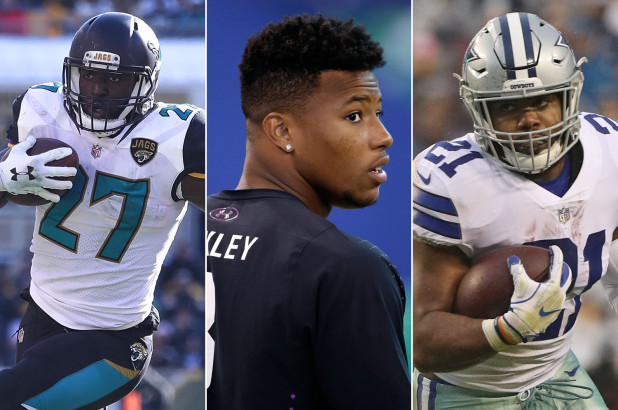 A few years ago, I started a new dynasty league. One of my longtime friends and owners in other fantasy football leagues of mine, Michael, jumped in. Not only was it a 2QB league, it was also a 2TE league. You can imagine my surprise when Michael’s first four (!) picks were all running backs.

What is he thinking? I wondered to myself. This is what we would do in the 1990s, not what we should be doing now! Admittedly, Michael’s team has struggled compared to those who loaded up on QBs, WRs, and even TEs early. It didn’t help that three of those four RBs soon suffered serious injuries and/or retired early.

Nonetheless, as I think back to that draft, I realize that Michael might have been quite prescient about a resurgent trend: the dominance of the stud running back in fantasy football.

The reasons why fantasy football leagues have shied away from elevating running backs to the status of top commodity are both numerous and familiar. They tend to get injured. They tend to have shorter careers than other positions. There is a lot of year-to-year variance at the top. There aren’t as many studs. The utilization of running-back-by-committee throughout the NFL is rampant. The annual emergence of waiver wire-RBs who put up top-10 numbers is reliable. And, with the NFL becoming a pass-dominated league, QBs, WRs, and elite TEs take on new prominence in fantasy football. Indeed, the zero-running back strategy — where you load up your roster with other positions saving RB until the end — has become quite chic. 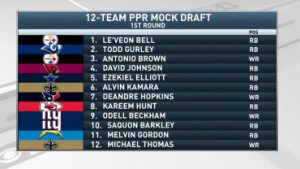 Times are changing, though. As evidence, even in many new superflex drafts, I’m seeing RBs go as the top three or four picks overall and as many as six in the first ten picks and ten in the first twenty! Why is this the case?

Certainly, from Zeke to Gurley to Hunt to Fournette to Bell to DJ to Kamara to Cook to Gordon to Mixon to McCaffrey to Freeman to Howard to Henry and to all the other incoming rookie RBs, we could see a revival in the true workhouse running back. And they’re all young! We also know that the NFL is cyclical in nature: as passing games have peaked, they must inevitably regress.

In addition, I look at the landscape of NFL quarterbacks. The vanguard of elite QBs is aging rapidly: Brady, Brees, Roethlisberger, and Rivers don’t have many top-end years left; Manning looks nearly done already. I also don’t see the younger quarterback crop filling their shoes. Guys like Garrapolo, Watson, Cousins, and the rookie quarterbacks are all considered the new elite and franchise players. But they haven’t shown it yet…

Put it all together: The plethora of stud running backs combined with the likely decline in quarterback play — not to mention that it seems as if NFL passing has piqued — points toward a resurgence of the running back as the top commodity in fantasy football, even in a superflex league.

Remember the days in the 1990s when your first three if not four picks were all running backs? That might be coming back. It’s on you, now, to determine if you think that this is the new trend so that you can get ahead of it or if the projection of the new crop of running backs as legitimate studs is nothing but an over-hyped fallacy so that you can exploit it. Which do you think is the case? Share your comments below!

*One final note about Michael, who offers me (and, I believe, all of us) an essential reminder in fantasy football. In another dynasty-like league that we are in — a twelve-team superflex auction league — Michael has spent about ⅓ of his total budget on Zeke and Barkley. He seems to be capitalizing on the resurgent stud RB in this league, too. Most importantly, you have to give him credit: When he is passionate about a strategy, he commits to it. Too often, we fall victim to groupthink. Michael, however, identifies a strategy and goes all-in on it. We should all have that much confidence in our fantasy football convictions!