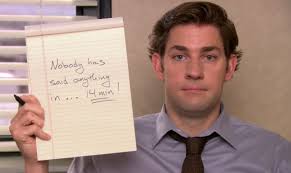 It’s the first date, and things are going well. You’re having great conversation, your date is laughing at your corny off-the-cuff jokes, you’re recounting fantastic stories, and you’ve even hinted about what you would do on a second date. Things could be going better. Until… it finally happens: the first, uncomfortable, awkward silence.

Now, we all know that experts teach that silence isn’t a bad thing. Take a few breaths. Wait a few moments. Stare into your date’s eyes. Give a genuine smile. But that’s not what you do. You get nervous; you’ve been preparing for this date for weeks, planning how things would go, and you’re energized from the scintillating conversation. Instead of embracing the silence, you start babbling, breaking the mood. In just a few moments, the momentum is gone. Everything that you have built up so far with date starts crumbling down. If only you had embraced the silence…

The days leading up to the first NFL game after our fantasy football drafts are very much like that awkward silence. We spent all off-season following NFL news, prepping for our various drafts or auctions, making some bold trades, and drafting our teams. And now there is nothing really left to do. It’s the awkward silence before the season begins.

So we get bored, frustrated, or nervous. We feel the need to fill that fantasy football void with some noise. Maybe we trade away our first-round stud after hearing a beat writer’s negative report or drop our favorite sleeper for a newly-hyped player. We start second-guessing all of our big off-season decisions. We tinker with our lineups, putting in players that have tasty week one match-ups based on last season’s teams and bench our round two elite player. All because of the need to fill that uncomfortable, awkward, fantasy football silence.

Instead I offer a different approach. I offer a different approach. Our drafts and auction are (mostly) done. We may have a waiver wire claim or two to make or a couple of lineups to set. But we need to take this opportunity to be grateful because, somehow, despite all of the madness of the world from coronavirus to the racial tensions in the United States, despite all of these, somehow NFL football is starting up this Thursday. No one knows how long it will last, and, most importantly, we all hope for the health and safety of the players, the coaches, the refs, and everyone else traveling with the teams. Still, we can look forward to NFL kickoff on Thursday.