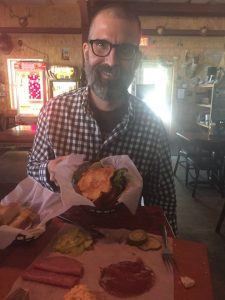 What is your name?
Justin Eleff
What is the name of the league that you are presenting for “League Spotlight”?
JFNFL (short for John Forbes Nash Jr. Fantasy Football League)
Is there a website for the league that are you comfortable sharing publicly?
I believe we’re mostly visible to the public at ESPN (http://games.espn.com/ffl/leagueoffice?leagueId=770610&seasonId=2017), but you’ll probably get a better sense of things by reading the rest of what I’ve written here.

What is unique about the league?
We named the league after John Nash because we based a number of our rules on game theory concepts, hoping to maximize the number of difficult decisions each team would have to make in each phase of the season. It’s a small league, but we encourage co-ownership, partly because I believe it’s often harder to make good decisions in tandem, and partly because I wanted to test how jointly owned teams would fare against individually owned teams. I don’t think we’ve reached any consensus, but as of 2017 half of our teams (including my own and Moishe’s) were jointly owned and half were not, with a total of fourteen people involved in running eight franchises. We double up a couple of positions, with each team starting two QBs and two TEs, and we have very deep benches (eight reserves behind a ten-man active roster). We don’t use kickers or defenses, because kickers and defenses are bullshit — kicking points just flow from what other offensive players are doing anyway, and scoring systems for DSTs tend to make one foundational error or another: they place wildly disproportionate emphasis on largely random events like pick-sixes, or they get horrendously complicated whether or not they succeed at measuring the real-life quality of a defense. Separately, we allocate players in some unusual ways, the best of which I’ll cover below.

Who founded the league?
I did, together with my intrepid (if not entirely useful) co-owner.

How long has the league been in existence?
Depends on how you count. I threw something of a tantrum a few years back and quit fantasy football for roughly ten minutes. Then I discovered that I could not live without this league specifically, so we relaunched, for good this time, in 2017.

How did the idea for the league originate?
I had played fantasy football for something like fifteen years before founding the JFNFL, and in that time had gotten very good at winning casual leagues and even better at complaining about the rules they were using. So there were two prongs to the idea: bring together only a bunch of people who were serious about this stuff, and make a new sort of league that maximized the number of difficult decisions each team would have to make while minimizing the role of luck in determining who won and lost.
What are you most proud of about the league?
Because I was bored with my candy-from-babies casual leagues, and also because I liked the idea of running the new league as a kind of social experiment, I recruited a bunch of owners who hadn’t been in my previous leagues, but had instead been the best owners in their respective unconnected leagues. They didn’t know each other at all, and most of them knew my name but nothing of real substance about me. Chairman Moishe of this very website was one such recruited stranger; I believe I “met” him when he wrote in to ask a fantasy baseball question in one of the springs I served as editor of Fantasy Baseball Index magazine, and I asked him to join the JFNFL when we decided to expand the league that fall. What I’m proudest of now, many years after most of these strangers came together, is that we still know each other only through the league — and yet we all genuinely want to destroy each other season after season after season.

Are there any funny anecdotes from league history?
My favorite is the time one of our sets of co-owners, a father and son team, chatted through each pick they were about to make live in our draft room. No phone call, no series of texts. Just “You thinking Matt Ryan here, Casey?” and then “I want to grab another receiver first, then we’ll come back for the quarterback next round,” right there in real time in the same thread where we were all shit-talking each other. This went on for two hours but has now lived in legend for something like five years.

If someone were interested in finding out more about the league or possibly joining, who should they contact and how?
Moishe will be in the JFNFL as long as I am, because his Alamosa County Fire Ants and my far more dignified Mississippi Queens are bitter rivals. One way or another he’ll get your questions answered.